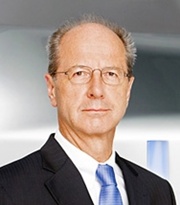 Volkswagen's finance chief Hans Dieter Poetsch will become the next chairman, a development that commentators said augured well for the company after rival factions including ousted patriarch Ferdinand Piech united to back him.

The company had been seeking a permanent successor to Piech, who was eased out in April following a clash with chief executive Martin Winterkorn over strategy but still wielded influence through his family holding.

A day after proposing extending the CEO's contract by two years until the end of 2018, the supervisory board's executive and nomination committees yesterday proposed to elect Poetsch, 64, as chairman.

According to the company's 51-per cent owner Porsche Automobil Holding SE, Poetsch enjoyed the unequivocal support of its supervisory board – which included Piech.

The move was also supported by Winterkorn, according to a source familiar with the company's thinking, AP reported.

Shares in Volkswagen rose 2.7 per cent on the news at €167.50 but still continued to underperform a 3.2 per cent-stronger German DAX.

The automaker said yesterday that the 64-year-old Poetsch would be proposed for election to its supervisory board at an extraordinary general meeting in November.

Piech losing a power struggle with CEO Martin Winterkorn, Piesch said in an interview that he was ''at a distance'' from Winterkorn, but the CEO received support from other board members.

The company said on Wednesday, that it planned to extend Winterkorn's contract by two years until 2018.