After Videocon, Anadarko puts 10 % stake in Mozambique gas field on the block

US-based oil and natural-gas producer Anadarko Petroleum Corp has put up for sale a part of its stake in a prolific Mozambique gas field, Reuters today reported, citing sources familiar with the matter. 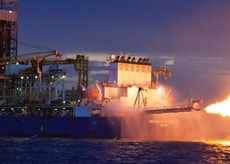 The Houston, Texas-based company will sell 10 per cent of its 36.5 per cent stake in the highly prolific Rovuma-1 offshore gas fields in Mozambique.

The move comes barely a month after Videocon Industries sought to divest its 10-per cent stake in the field for which it is reported to be seeking at least $3 billion.

Anadarko is the operator of Rovuna-1, and other stakeholders include Japan's Mitsui with 20 per cent, Bharat Petroleum with 10-per cent, Thailand's PTT Exploration & Production with 8.5 per cent, and the remaining 15 per cent participating interest is currently held by the national oil company of Mozambique Empressa Nacional de Hidrocarbonetos EP (ENH EP), which can be altered during the production phase.

Anadarko and its partners have so far discovered three major natural gas finds in Rovuma-1, which is currently estimated to hold between 30 and 60-plus trillion cubic feet (Tcf) of recoverable natural gas.

According to Anadarko, the current upside for total gas in place for the discovered reservoirs on the block is nearly 100 Tcf, or nearly 10 times the optimistic estimate given by Reliance Industries for its D6 block in the Krishna-Godavari basin.