More reports on: In the news, Alcoholic beverages, Corporate finance 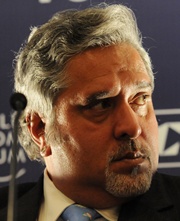 United Spirits Ltd (USL), India's top liquor maker, has been served notice by the ministry of corporate affairs and the income tax department demanding inspection of its accounts even as the company battles fund diversion caused partly by loans to firms belonging to its erstwhile promoter UB Group.

USL, which is currently owned by British liquor group Diageo, in its earnings report filed with the Bombay Stock Exchange (BSE), has mentioned the receipt of notices from the ministry of corporate affairs and the income tax department for an inspection of its books of accounts and other books.

The government's move comes after the majority shareholder Diageo put pressure on Vijay Mallya, who is trying to cling to the post of chairman of United Spirits despite Diageo, which holds about 55 per cent, asking him to quit.

In its earnings press release sent to the BSE yesterday, the company stated that the MCA has sought an inspection of  its books under Section 206 (5) of the Companies Act and the I-T depart under Section 131 of the Income Tax Act.

Section 206 of the Act empowers the government to call for information, inspect books and conduct inquiries. Sub-section 5 under this allows it to directly inspect books and papers of a company by an inspector appointed by it for the purpose.

Similarly, I-T Act Section 131 gives the assessing officer the power to scrutinise, inspect and demand the production of books of account and other documents of an assessee.

The board of United Spirits, now controlled by Diageo, had in September 2014, ordered a probe into the loans given by United Spirits to UB Group companies after the company posted a whopping net loss of Rs4,488.77 crore for the financial year ended 31 March 2014.

The company had made provisions of Rs1,012.75 crore on account of 'doubtful loans' and exceptional item of Rs3,235.73 crore on sales of Scottish subsidiary, Whyte & Mackay.

"Certain pre-existing loans / deposits / advances due to the company and its wholly owned subsidiaries from United Breweries (Holdings) Ltd which were in existence as on March 31, 2013, has been taken into consideration in the consolidated annual accounts of the company drawn up as of that date," the company had said then.

Diageo had since engaged independent advisors and specialists to carry out an investigation.

The enquiry revealed that between 2010 and 2013, funds involved in many transactions were diverted from the company and / or its subsidiaries to certain UB Group companies including, in particular, Kingfisher Airlines Ltd.

Diageo had asked Mallya to quit the board, citing this report, but Mallya continues to defy Diageo

For the three months ended 31 March 2015, United Spirits reported a standalone net loss of Rs1,799.3 crore. The company has made a provision for Rs1,754.97 crore, which includes loans and advances given various Mallya group companies.

Regarding a Rs995.46 crore loan United Spirits gave away to United Breweries Holding, the auditors' note says that the committee appointed by Diageo had probed the background to providing such a debt and also the rationale behind charging a 9.5 per cent interest rate on it.

The probe had found that between 2010 and 2013, there were certain transactions for which entries were made to show lower exposure to United Breweries.

Moreover, the loans were provided for a tenure of eight years for which the repayments were to start only from the end of 6th anniversary of the effective of loan agreement. The loan is repayable in three installments.

"Prima facie, this indicates various improprieties and potential violations of provisions, inter alia, of the Companies Act, 1956, and the listing agreement signed by the company with various stock exchanges in India on which securities are listed," the auditors have said in the note along with the earnings press release.