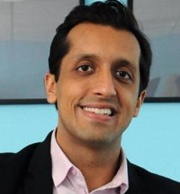 Twitter India head Rishi Jaitly has quit after four years at the company. Announcing his exit on Twitter through a series of tweets on Tuesday morning, Jaitly said he is quitting for ''a personal / civic calling'' in Chicago, but he noted that he would spend significant time in India / Asia, and continue to work in the field of technology.

''My mission remains the same: harness tech / media's scale to connect users / citizens to their voice / agency/leadership in places they care about.  I myself care deeply about the US, India, emerging markets & intend to devote myself to building bridges in service of my mission,'' Jaitly said on Twitter.

''We thank Rishi Jaitly for his contributions, entrepreneurship and leadership over the past four years at Twitter. He was our first person on the ground to bring Twitter into the high-growth Indian market; He has created bold, strategic partnerships to enter and grow new markets for Twitter; and has successfully built up our Media Partnerships teams across the Asia Pacific and Middle East,'' a Twitter spokesperson told The Economic Times in a statement.

''There will be a smooth transition as his last day is in late November after which he will move back to the US, but will remain engaged in India, as he pursues new opportunities to harness the power of technology and scale of mass media to empower voices, particularly in emerging markets,'' the spokesperson added.

Twitter, however, declined to disclose any information on replacement for Jaitly's position.

According to a Hindustan Times report, Jaitly's resignation was not surprising for most Twitter India employees, who knew that the domestic market will be impacted by the micro-blogging site's global restructuring programme, as the company failed to get new users and generate higher advertising revenue, giving way to Facebook, Google and Snapchat.

The company said last week it would cut 9 per cent of its global workforce, affecting more than 300 employees as part of a broader restructuring. It has also been in talks with various companies for a possible stake sale.

''Rishi Jaitly's resignation is possibly just the beginning of the end of the current leadership in India and more resignations might follow,'' a person in know of the developments told HT.

Khursheed declined to comment. Singh and Gujral did not respond till the time of going to press.

According to reports, Khursheed is already looking out for opportunities outside Twitter.

A twitter executive said ''there was a bigger story in this''. Twitter is looking to focus on higher advertising revenue, with a leaner and flexible team focussing on building a sales and marketing team in India, in line with the company's global strategy.

In its new avatar, Twitter will focus on building traction in multi-format videos, also an important area for Facebook and Google. It has also moved away from its 140-character limit, it no longer includes videos and pictures within that.

India is the silver lining in Twitter's operations, and the company's co-founder and chief executive Jack Dorsey, doesn't want to let it go. According to data from San Francisco-based app intelligence firm App Annie, Twitter's monthly active user base grew 35 per cent in the country in September, compared to the previous month, while in the US it increased only 4 per cent. The total time spent by Indians on the micro-blogging site also grew 60 per cent in September.

Jaitly had helped popularise Twitter in India, especially its adoption among government departments to respond to citizen queries.

A former Google India executive, Jaitly had joined Twitter in November 2012 to lead the microblogging giant's expansion to India.

In 2014, he took on additional responsibility as Twitter's Market Director for India & SE Asia, leading the company's growth and media partnerships across Southeast Asia. Last August, Jaitly was made the vice-president (Media) for Asia Pacific and Middle East North Africa regions.

Prior to joining Twitter, Jaitly worked at Knight Foundation as program director. However, he is better known for his stint as the head of public-private partnerships at Google India.