Elon Musk's electric car company Tesla Motors has made an offer to buy Musk's solar power company, SolarCity, in an all-stock deal for as much as $2.8 billion in an attempt to make a one-stop shop for cleaner energy. 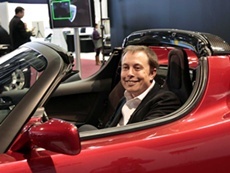 SolarCity, for which Musk,  is both chairman and its largest shareholder, is the market leader in residential solar panel installations in the US, but has about $6.24 billion in liabilities, including debt. Musk is also the chairman of Tesla Motors.

In a proposal submitted to the SolarCity board of directors, Tesla Motors has offered to acquire all of its outstanding shares of common stock in exchange 0.122 to 0.131 Tesla common shares for each share of SolarCity.

Musk described the deal as a ''no-brainer'', saying, ''Instead of making three trips to a house to put in a car charger and solar panels and battery pack, you can integrate that into a single visit. It's an obvious thing to do.'' Tesla had begun introducing rechargeable batteries for home use that can store electricity and smooth fluctuations in power grids.

Tesla shares plunged more than 13 per cent to $189.99 in extended trading - amounting to a loss in value of about $4.3 billion, or more than the value of the offer for the other company. Shares of SolarCity rose about 18 per cent to $25.02.

SolarCity is run by Musk's first cousins, the chief executive, Lyndon Rive, and his brother, Peter, who is also a founder of the company and its chief technology officer.

''They have made it easy for customers to switch to clean energy while still providing the best customer experience. We've seen this all firsthand through our partnership with SolarCity on a variety of use cases, including those where SolarCity uses Tesla battery packs as part of its solar projects,'' Tesla stated in a release.

Musk, who owns 19 per cent of Tesla and 22 per cent of SolarCity and is the largest shareholder of both companies, said he would recuse himself from voting on the deal. He could not say how soon shareholders could vote on the deal, as due diligence needs to take place first.

SolarCity chief executive Lyndon Rive, Musk's first cousin, said he supported the deal but would also recuse himself from voting. Rive's brother, Peter, is also a founder of the company and its chief technology officer.

Musk said Tesla's mission has always been tied to sustainability. ''We seek to accelerate the world's transition to sustainable transportation by offering increasingly affordable electric vehicles. And in March 2015, we launched Tesla Energy, which through the Powerwall and Powerpack allow homeowners, business owners and utilities to benefit from renewable energy storage.

''It's now time to complete the picture. Tesla customers can drive clean cars and they can use our battery packs to help consume energy more efficiently, but they still need access to the most sustainable energy source that's available: the sun.
If the deal goes through, SolarCity will adopt the Tesla brand and sell its solar panels alongside Tesla's PowerWall home batteries to store electricity created during the day for when it is needed at night.

But his offer also highlighted the unusual moves that Musk has made to support the various arms of his empire, where he is the largest shareholder of each company. He has taken out loans to buy shares in Tesla and SolarCity, some backed by his personal stock holdings in both companies - a risky decision that leaves him exposed to margin calls if their stock prices slide too far.

He defended the practice as low-risk for other shareholders, given the sheer size of his personal net worth of more than $10 billion.

Burning cash
Both of the companies, located 17 miles apart in Silicon Valley, are burning through cash as they try to expand in still relatively small markets. Tesla has lost $1.2 billion in the past two years alone while SolarCity has suffered losses exceeding $1.1 billion during the same period.

Yet both have fared well in the stock market, particularly Tesla, largely thanks to Musk being widely viewed as a visionary since he co-founded online payment service PayPal in 1998.

While both companies have grown fast and consumed enormous amounts of cash along the way, SolarCity has also been buffeted by changes in solar energy regulations - local policies have cut into the savings that solar providers have promised. Its troubles have left the company with a $2.6 billion in long-term debt and growing losses. Last year, interest payments on its debt equaled nearly a quarter of its sales. The company has been regularly reporting quarterly losses and its stock has fallen nearly 60 per cent so far this year.

Tesla has had a better run of news, although its shares have also fallen over the past year. Analysts have also said that Tesla's main business may be in batteries. It is expanding its $5-billion ''Gigafactory'' near Reno, Nevada.

It may be able to help SolarCity generate more cash or reduce its cash consumption, but the solar company could be a burden. In theory, a combination of Tesla and SolarCity would have burned through nearly $5 billion of cash last year. Investors will have to be willing to lend to, or buy the stock of, a high-growth company consuming a lot of cash if they believe it will eventually generate healthy cash flows.

Market leader
Musk and Lyndon Rive hatched the idea for SolarCity during a trip to the Burning Man desert festival in 2004. More than a decade later, SolarCity has become the top US residential solar installer thanks to a no-money-down financing scheme that allows homeowners to pay for their solar panels through a monthly fee that is less than what they would pay their local utility.