Tata Consultancy Services (TCS), the country's top IT services exporter, on Thursday reported a net profit of Rs5,945 crore for the three months ended June 2017, down 10 per cent from the previous quarter and down 5.9 per cent year-on-year. 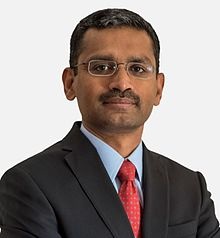 The company's revenues too were slightly lower compared to the previous quarter, at Rs29,584 crore, although these were up a paltry 1 per cent year-on-year.

TCS said it was hit by currency volatility and wage hikes. The company said it took a Rs650 crore hit from currency fluctuations alone.

Together, the wage hike and stronger rupee shaved off TCS' operating margins by 2.30 percentage points to 23.4, against the 26-28 per cent target.

TCS said it is now focusing on smaller projects that the digital revolution would throw up besides the very large deals.

"We see a combination of strong demand for smaller projects coming out of newer areas like digital and some amount of very large transformational deals, especially in insurance. As that materialises, we should see a significant change in the environment," managing director and chief executive Rajesh Gopinathan said while announcing the company's quarterly results.

Gopinath said the rupee appreciation against the dollar dented the bottomline by Rs650 crore, while wage hike for its 3.85 lakh employees cost another Rs650 crore.

This explains the 2.3 per cent fall in TCS' operating margins to 23.4 per cent, he said, adding that the company is confident of achieving the target of 26-28 per cent operating margin for the second year in a row.

Gopinathan said revenue from cognitive services grew 5 per cent over the preceding quarter, there were two multi-million dollar deals on the digital interactive side and over 20 new engagements on the Internet of Things while revenue from the newly started cyber security vertical grew double digit.

He said while the wage hike impact generally pulls down margins by 2 percentage points, productivity gains would make up for it. He also asserted that the despite the headwinds the company did not lay off any employees.

"For the long or medium term, our target continues to be the same but right now the focus is to ensure that the transition (under newer leadership team) goes smoothly; we stabilise into the new operating model and we maintain stable profitability for a future expansion in our margins," he said.

Chief financial officer V Ramakrishnan said TCS continues with its currency hedging strategies despite the reverses in the reporting quarter.

Revenue from the digital stream grew 26 per cent to around $3.5 billion, constituting 18.9 per cent of the company's current business.

Ajoy Mukherjee, executive vice-president and global head, human resources, said overall hiring in the current year would be less than last year. ''However, hiring is strong and we will be growing in all geographies,'' he added.

TCS' headcount came down by over 1,400 to 3.85 lakh over the past three months, but Mukherjee asserted that there have not been any layoffs unlike at some of its peers such as Wipro, TechMahindra and others.

The total employee strength of the company at the end of Q1FY18 was 385,809 on a consolidated basis with gross addition of 11,202 and net decline of 1,414 employees during the quarter. The total attrition rate was at 12.4 per cent, including BPS, while IT attrition stood at 11.6 per cent.

He, however, said recruitment will be lower this year after extra-hiring done in the immediate past, productivity gains and also training over 2.15 lakh of its staff in digital skills.