Tata Sons has teamed up with European aircraft maker Airbus to bid for a $2-billion contract to replace the Indian Air Force's ageing fleet of Avro transport planes. 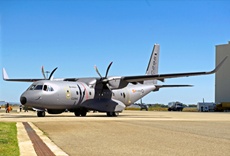 Under the contract, Airbus' Defence and Space unit and Tata's Advanced Systems would replace the 56 Avro jets with Airbus' C295 transport planes, Airbus said on Tuesday.

Airbus would supply the first 16 planes in "fly-away" condition from its own assembly line, while Tata Advanced Systems Ltd (TASL) will manufacture and assemble the remaining 40 aircraft in India.

The contract, if awarded, would make Tatas the first Indian group to build military planes in India where current manufacturing is dominated by state-run Hindustan Aeronautics.

TASL has thus far been a supplier of components for global aerospace firms like Sikorsky and Lockheed Martin.

''It is a landmark for the development of aircraft manufacturing capability in India, now that Tata Advanced Systems is poised to take this step towards building entire aircraft in India,'' TASL's chairman S Ramadorai said in the statement.

''The C295 is a superbly reliable and tough aircraft with outstanding economics which is proven in the most difficult operating conditions all over the world,'' said Domingo Ureña Raso, executive vice-president in charge of military aircraft at Airbus Defence and Space. ''It has already been ordered by 19 countries, many of which have placed repeat orders. And just this year it has dominated the market with orders for no fewer than 20 aircraft from five countries.''

TASL has a joint venture with American helicopter manufacturer Sikorsky through which it manufactures components needed to make the airframes of the latter's S-92 choppers. TASL is also the sole global supplier of finished cabins for the S-92 choppers.

The contract would also give the first big boost to the Narendra Modi government's `Make in India' initiative, aimed at making India a manufacturing hub.

The new BJP-led NDA government has raised foreign investment limit in defence to 49 per cent since coming to power in May and is moving to clear a backlog of military equipment orders.

The IAF is saddled with an aging fleet of Avro aircraft and the joint venture will supply Airbus' C295 medium transport aircraft, a joint statement issued on Tuesday said.

The Modi government has made it clear that it would prioritise companies which have pledged to manufacture within India.

Besides the Tatas, other engineering groups such as Larsen & Toubro, Mahindra and Mahindra and Bharat Forge are keen to enter the defence sector where the government would be spending billions of dollars to build arms and defence equipment.

India is expected to spend an estimated $250 billion in defence purchases over the next ten years.

The replacement of the Avro jets, planned in May 2012, has been hanging fire for lack of interest from potential bidders and ministerial infighting.

The new government is trying to replace much of the IAF's outdated fleet of planes. The biggest contract of a $15 billion deal with France's Dassault Aviation to buy 126 Rafale fighter jets is still to be finalised.

The government, since it came to power in May this year, has cleared over Rs100,000 crore worth of defence projects, including naval projects worth Rs80,000 crore cleared over the weekend, to be made in India.

India, with an annual defence budget of around $38 billion, is the largest importer of defence equipment in the world, including arms, and a 51 per cent share in this would make for around $20 billion worth of business at home.