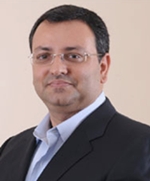 Cyrus Mistry, who succeeded Ratan Tata as the sixth chairman of the Tata Group, will formally take charge of office on Monday, company sources said today.

Mistry, who made a brief appearance at Bombay House, the headquarters of the Tata Group, did not turn up at the office.

"Today and tomorrow being holidays, Mistry will attend office in his capacity as the group chairman only on Monday," sources at the Bombay House said today.

Ratan Tata, who was busy with his 75th birthday celebrations at the Tata Motors manufacturing facilities at Pune, also did not attend the office today, the last day of office.

Mistry, who has been with the group since 2006 in various capacities, is the scion of Shapoorji Pallonji Mistry, the largest private shareholder in the Tata group's holding company Tata Sons.

Born on 4 July 1968, Cyrus Mistry completed his graduation from Mumbai University and then secured a civil engineering degree from London's Imperial College of Science, Technology and Medicine and followed it up with a masters in management from the London Business School.