Japanese electronics giant Toshiba again missed a deadline to file its annual results, but warned it was likely to report a net loss of ¥950 bn ($8.4 bn) for the financial year ended 31 March 2017. 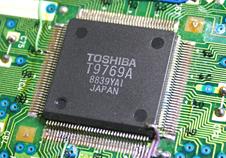 Tokyo-based Toshiba Corp, whose US nuclear unit Westinghouse has filed for bankruptcy protection, however, failed to win auditors' approval for its financial results for the previous quarter, after questions were raised over the acquisition of US nuclear construction company CB&I Stone and Webster.

The Tokyo Stock Exchange had given the Japanese giant until 15 May to report, but Toshiba said its auditors were still examining the figures.

Toshiba said the figures released today are projections, rather than results, since they lack the company's auditors' approval, but were in line with what it had said recently.

While the estimated loss for the year ended March is slightly less than it had predicted last month, the loss was about double the ¥460-billion ($4.1 billion) loss racked up the previous fiscal year.

Toshiba, whose products include computer chips and household appliances, acquired Westinghouse in 2006. Its president, Satoshi Tsunakawa, has recently said the strategy based on Westinghouse was a mistake, and has promised it won't take on new nuclear projects.

Toshiba has been trying to sell its computer-chip business to shore up its finances, but has become embroiled in a dispute with US joint venture partner Western Digital, which is demanding that Toshiba not sell it to anyone else (See: Western Digital seeks international arbitration to halt sale of Toshiba chips arm).

Western Digital said that several of its SanDisk subsidiaries have filed a request for arbitration with the ICC International Court of Arbitration over its NAND flash-memory joint ventures with Toshiba.

The request seeks to stop Toshiba's sale without SanDisk's consent, arguing that it would be violation of the joint venture agreement. The arbitration will take place in San Francisco, it said in a statement on Sunday.

"Seeking relief through mandatory arbitration was not our first choice in trying to resolve this matter. However, all of our other efforts to achieve a resolution to date have been unsuccessful, and so we believe legal action is now a necessary next step," said Western Digital chief executive Steve Milligan.

Toshiba, originally known for its consumer electronics products, has faced a series of difficulties, especially after it became clear that its US nuclear unit, Westinghouse, was in financial trouble.

Westinghouse was put into Chapter 11 bankruptcy in March, which protects it from creditors while it undergoes restructuring.

Toshiba had, last month, admitted its future may be in doubt, not just for Westinghouse, but also due to an accounting scandal, uncovered in 2015, which led to the resignation of several members of the firm's senior management, including the chief executive, after the company was found to have inflated the previous seven years' profits by $1.2 billion.

Toshiba is the world's second-largest chip manufacturer, with its products used in data centres and consumer goods worldwide, including iPhones and iPads.