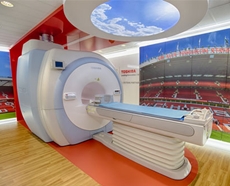 Bidders in the second round of the auction included Fujifilm Holdings, and Konica Minolta Inc, which had partnered with European buyout firm Permira, Reuters today reported, citing sources familiar with the matter.

Canon's offer in the second round was more than 700 billion yen ($6.2 billion), the report said.

Japanese paper Nikkei business daily said Canon had lead position because of the value of the its offer and also because there was little overlap between the two companies medical equipment businesses, which will not raise anti-trust issues.

Toshiba had in last December said that it was considering the sale of Toshiba Medical Systems Corp in order to focus on its semiconductor and nuclear power businesses.

The unit generated revenue of 405.6 billion yen in the last financial year.

Toshiba, whose business spans a wide range of sectors from home electronics to nuclear power stations, is recently recovering from a $1.2-billion accounting scandal that forced the company to restate earnings for more than six years.

Top executives of the company had set unrealistic profit targets that systematically led to flawed accounting. An investigation had found that accounting irregularities were ''skillfully'' hidden from outside observers.

The Tokyo-based company sold its image sensor business to Sony Corp, its 4.6-per cent stake in Finnish elevator maker Kone Oyj for $946 million, and has also started the process of selling part of its loss making chip business as part of its restructuring plan.

The Tokyo–based company also makes enhanced ophthalmic diagnostic precision equipments such as retinal cameras that enable examinations with reduced stress on patients, and optical coherence tomography devices capable of 3-D scanning to support the diagnosis of retinal disorders that can lead to vision loss.