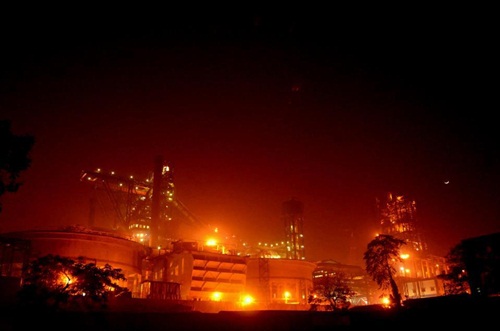 Tata Steel said its consolidated net profit for Q4 FY19 is not directly comparable to Q4 FY18 figures as it does not include NATSteel Holding and Tata Steel Thailand as they are classified as `Asset Held For Sales’.
Consolidated net profit in the quarter ended 31 March fell to Rs2,295 crore, from Rs14,688 crore a year earlier. Consolidated net profit for financial year 2018-19 declined 49 per cent to Rs9,098 crore from Rs17,564 for the previous fiscal.
Tata Steel had a one-time exceptional gain of Rs11,376 crore in Q4 FY18 due to restructuring of a UK pension scheme, which boosted profit in the year-earlier period.
Consolidated revenue for the quarter ended 31 March 2019 was, however, up 25 per cent at Rs42,424 crore, against Rs33,705 crore a year earlier. Consolidated revenue for FY19 increased 27 per cent to Rs1,57,000 crore from Rs1,24,000 crore a year earlier.
For the fiscal 2019, Tata Steel said its revenue from Indian operations increased 47 per cent year-on-year to Rs88,987 crore, due mainly to higher sales and better realisations. Adjusted earnings before interest, taxes, depreciation and amortisation (EBITDA) for the year increased by 56 per cent to Rs23,883 crore. EBITDA margin stood at 26.8 per cent with adjusted EBITDA per tonne of Rs14,687.
The year also saw the boards of Tata Steel and Tata Steel BSL (Bamnipal Steel), formerly Bhushan Steel, approving a merger. Tata Steel acquired bankrupt Bhushan Steel for Rs35,200 crore in May last year.
“The merger will drive operational synergies and efficiencies, reduce the regulatory burden and simplify the group structure. Both boards have relied on valuation reports and fairness opinions provided by independent experts, and recommend a merger ratio of 15 shares of Tata Steel BSL for every one share of Tata Steel. The merger is subject to shareholders and other regulatory approvals," the company said in a statement.
Tata Steel said its production in the March quarter rose 26 per cent from the year-ago period to 7.21 million tonnes.
FY19 consolidated steel production, as well as deliveries, rose 17 per cent year-on-year to 27.11 million tonnes and 26.8 million tonnes, respectively. Local production alone surged 35 per cent to 16.81 million tonnes, while deliveries rose 33 per cent to 16.26 million tonnes.
Higher production and deliveries were aided by the acquisition of Bhushan Steel and ramping up of capacity at the Kalinganagar plant.
Sales were driven by industrial products which grew 42 per cent year-on-year, while branded and retail products grew 30 per cent.
Tata Steel Europe, meanwhile, continues to pursue merger of operations with Thyssenkrupp AG, the company, adding that it is working to secure the required regulatory approvals for the proposed 50:50 joint venture. The European Commission has issued its ‘statement of objection’ for which both Tata Steel and Thyssenkrupp have submitted a “comprehensive package of proposed remedies".
Tata Steel said its consolidated gross debt stood reduced by Rs8,781 crore during the quarter.
“Despite the liquidity issues in the domestic markets, we were able to extend our debt maturity profile by successfully raising Rs4,315 crore through 15-year non-convertible debentures, and completing the long-term financing for Tata Steel BSL," Koushik Chatterjee, executive director and chief financial officer, said.
MORE REPORTS