Tata Steel's Rs45,000-bid was formally identified as the ''highest evaluated compliant resolution'' for Bhushan Steel while Liberty House was chosen as the preferred H1 bidder for Amtek Auto as the National Company Law Tribunal (NCLT) took a final decision on two of the high profile auctions of distressed assets on Wednesday. 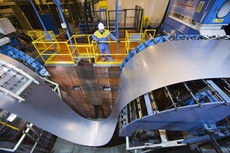 In an announcement on the BSE on Wednesday, Tata Steel said it has received a formal communication from the Resolution Professional of Bhushan Steel Limited (BSL) that it has been identified as the highest evaluated compliant resolution applicant to acquire controlling stake in BSL under the Corporate Insolvency Resolution Process (CIRP) of BSL on 6 March 2018.

Subsequently, the advisors to the CoC and Resolution Professional of BSL have entered into discussions with Tata Steel on the resolution plan. The CIRP will now decide the next step in the process as stipulated in the IBC, it added.

While the announcement comes as a major confidence builder for public sector banks that are struggling to recover loans extended to the highly-leveraged steel sector, for Tata Steel, this could mean that its overall debt could increase further.

Tata Steel's Rs45,400-crore bid implies minimal haircut for Bhushan Steel lenders who had put the company on the block to recover Rs56,000 crore.

But, with a gross debt of Rs88,000 crore as of December quarter, Tata Steel's debt could cross Rs1,00,000 crore in next two-three years, raising another spectre of debt after Tata Steel's acquisition of Anglo-Dutch company Corus in 2008.

JSW Living is a joint venture between JSW and Piramal Enterprises.

The acquisition of Bhushan Steel will add significantly to Tata Steel's 13-million tonnes domestic capacity and make it the largest steel maker in India, overtaking JSW Steel, at least for the time being.

Meanwhile, Tata Steel has proposed, subject to market conditions, and other considerations, a rights issue of its ordinary shares and has filed a letter of offer with Sebi and stock exchanges. It has also appointed Kotak Investment Bank, Axis Bank, HDFC Bank, ICICI Bank and SBI Capital   as lead managers to the issue.

Tata Steel is one of the world's largest steel production capacity of approximately 27.5 million tonnes per annum. With operations in 26 countries and commercial presence in 50 markets, the group recorded a combined revenue f Rs117,420 crore in FY17.