Tata Steel Ltd on Tuesday reported an unexpected fourth-quarter consolidated loss of Rs1,168 crore due to a one-time charge related to a deal involving the pension scheme at its bloated UK business. 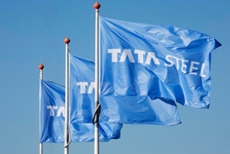 Tata Steel, which also has operations in other parts of Europe, had posted a consolidated net loss of Rs3,042 crore in the year-ago quarter.

Consolidated net profit from continuing operations, before exceptional items, for the January-March 2017 quarter stood at Rs3,352 crore, the company stated in a release. The company had reported a loss of Rs453 crore a year earlier.

Consolidated revenue for the quarter rose about 30 per cent from a year earlier to Rs35,005 crore.

The steelmaker said its UK business, including the country's largest steelworks at Port Talbot, was close to resolving pension issues, which brings it closer to a potential merger with German steel maker ThyssenKrupp AG.

Tata Steel's losses come at a time when all other major steel makers in India have reported profits, helped by the government's proactive policies, including the slapping of import duties on steel.

Tata Steel, which has been looking to sell its losing UK business for some time now, had to hold back as the UK pension scheme prevented it from going ahead with a deal.

Under the pension deal, announced on Tuesday, Tata Group will inject £550 million into the British Steel Pension Scheme subject to formal approval by regulators.

The Port Talbot plant is making operational profits but needs to be sustainable, he added.