Tata Steel may call off merger plans with Thyssenkrupp: report

Tata Steel could call off its merger talks with Thyssenkrupp as a merger with the German steelmaker would only further muddle its finances and make steel making costlier still for the Indian steel major, The Sunday Times reported on Sunday. 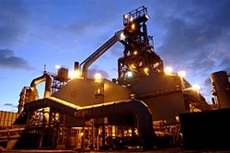 Tata Steel, which is trying to sort out its own £15-billion British pensions puzzle, would be sinking into deeper waters with the merger, says the report, adding that the talks have been slow moving.

Tata Steel is not sure that the planned merger of its European business with the German conglomerate Thyssenkrupp would be any remedy for its current ills, the report claims.

It is also not known whether Britain's planned exit from the European Union would reflect badly on the merger talks started last year and come in the way of a major restructuring of Tata Steel's UK business.

Also, last month, Tata Steel's UK workers had voted in favour of a new pension deal to save their jobs – a move that would help the restructuring of its British steel business with some help from the government and creditors (See: Tata Steel workers in UK to vote on new pension scheme and rescue plans).

Nearly 10,000 workers voted in a ballot in favour of moving from a final salary pension to a less generous scheme in return for job safety and Tata's promise of nearly £1-billion worth of investment over the next 10 years.

On the other hand, a deal with the German steel major could potentially lead to the formation of a European steel behemoth with blast furnaces in Wales, the Netherlands and Germany, but will bring Tata Steel under the financial pressure of an equally challenging German pension liabilities, The Sunday Times.

Dutch unions representing workers at Tata's vast Ijmuiden plant have raised concerns over the Thyssenkrupp pensions, which are an unfunded liability and underpinned by cash-flow from the steelworks, the report adds.

Also, Thyssenkrupp, which is under pressure from the activist investor Cevian, had recently sold its steel venture in Brazil for 1.3 billion euros.

Thyssenkrupp, which manufactures a range of products ranging from car parts to escalators, is reportedly already considering a share float as an alternative for a deal with Tata Steel.

''Talks are ongoing with Thyssenkrupp and to find a sustainable solution for the UK pension scheme,'' Tata Steel said in a statement.

Like Tata Steel, Thyssenkrupp is also in great financial and operational stress and is looking to solve problems at its various steel works. Any merger should be planned in a way that helps to solve the problems at either end rather than worsening these.