Tata Steel UK workers have voted in favour of proposals to de-risk the struggling business of an unsustainable pension plan, potentially saving 8,000 jobs, although with reductions to their pension benefits. 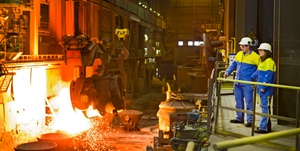 Nearly three quarters of workers belonging to the Community, Unite, and GMB unions, in separate ballots, agreed to the steel producer's proposal on pensions, jobs, investment and production that would save the Port Talbot steelworks in south Wales.

In return for reforms that would de-risk its pension liabilities, Tata Steel had offered workers to keep both blast furnaces at Port Talbot running for at least five years with no compulsory redundancies. It also planned to invest £1 billion over a 10-year period.

Tata Steel had proposed saving 8,000 jobs in its UK business and the Port Talbot steelworks by investing £1 bn in modernising its operations over the next 10 years.

This investment depends on spinning off the pension fund into a separate entity and replacing the final salary pension scheme with a less generous contribution scheme.

The existing scheme – the British Steel pension scheme (BSPS) – could enter the Pension Protection Fund (PPF) as part of the arrangement, which would result in a 10 per cent cut to members' benefits.

Tata Steel has claimed it could not afford to continue supporting the pension scheme. The BSPS has 130,000 members and £15 billion of liabilities. It would be by far the biggest pension scheme to be taken on by the PPF.

''This result provides a mandate from our members to move forward in our discussions with Tata and find a sustainable solution for the British Steel Pension Scheme (BSPS),'' said Roy Riches, general secretary of Community.

''Steel workers have taken a tough decision and have shown they are determined to safeguard jobs and secure the long-term future of steelmaking. Nobody wanted to be in this situation, but as we have always said, it is vital that we now work together to protect the benefits already accrued and prevent the BSPS from free-falling into the PPF,'' he added.

''Those sacrifices must be repaid by Tata Steel honoring its commitments on investment and job security. Nothing less would be a betrayal and add to the deep mistrust that steel workers now have for the company,'' he said.

''The UK government in Westminster must also repay the sacrifices and the commitment shown by steel workers to their industry by stepping up to support steel and secure its future,'' Brady said.

The UK government must now work in lockstep with the Welsh government and put steel at the heart of a manufacturing industrial strategy, which ensures UK steel is used in all major infrastructure and defense projects, he said.

''This ballot involved an extremely personal decision for everyone that voted. Whichever way our members cast their votes, we know they will not have taken that decision lightly and everyone's opinions must be respected,'' said Riches, adding that the British government still has an important role to play.