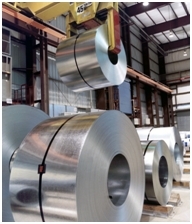 Tata Steel, Britain's largest and Europe's second-biggest steel producer, reported a year-on-year loss from discontinued operations of Rs3,296 crore on account of divestment of Long Steel UK Limited. The sale was completed during the quarter.

The company registered a total consolidated loss of Rs2,833 crore for the period  due to the divestment alone.

Turnover for the quarter stood at Rs26,406 crore or 5.41 million tonnes of steel.

Pre-exceptional underlying profit before tax of Rs. 1,080 crore compared to a loss of Rs234 crore in Q4FY16.

Yet, Tata Steel said, its liquidity position remained strong with cash and cash equivalents, including drawn and undrawn bank lines of Rs12,746 crore.

The company, which has been hit hard in Europe due to a fall in steel demand, excess capacity and rising imports from China, halted a planned sale of its British Port Talbot plant which has been hit by huge losses and massive pension liabilities. Instead, the company said it would look for an alliance, and named German steelmaker Thyssenkrupp AG among potential partners.

"We continue to progress the conversations," Tata Steel's Group Executive Director Koushik Chatterjee told a news conference on Monday. He said the company was also consulting all stakeholders on the pension liability issue.

Tata Steel's business in Europe, which accounts for nearly 60 per cent of the company's 24 million-tonnes-a-year steelmaking capacity, reported an operating profit of Rs856 crore, Chatterjee said, citing benefits from a weaker pound and an ongoing restructuring exercise that included job cuts.

In India, Tata Steel saw steel deliveries of 2.14 million tonnes in line with Q1FY16. Automotive sales grew by 19 per cent over Q1FY16. Branded products now account for 34 per cent of total deliveries.