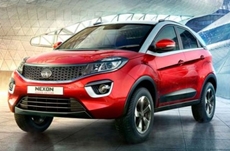 Tata Motors reported a standalone net loss of Rs467 crore for the quarter ended 30 June 2017 weighed down by a 11.8 per cent decline in sales (including exports) of commercial and passenger vehicles.

In the commercial vehicles business, the company said it has gained month-on-month improvement in sales and market share. The company is confident of further building on this trend with increased focus on stakeholders' engagement and on the ground marketing activities.

''While the first quarter results have not met our expectations, we are working with renewed focus and energy to improve performance of our commercial and passenger vehicle businesses. Our focus on top line, market share growth, major cost reduction initiatives and efficiency improvements have been significantly enhanced and accelerated in the last few months,'' Guenter Butschek, MD & CEO of Tata Motors, said.

Jaguar land Rover
Retail sales of Jaguar Land Rover for the quarter reached 137,463 vehicles, up 3.5 per cent on the previous year, led by the 2017 World Car of the Year, World Car Design of the Year and Women's Car of the Year award- winning Jaguar F-PACE (up 86 per cent year on year), and a sequence of successful market launches.

Continuing strong demand was seen for well-established models such as the flagship Range Rover (up 14 per cent) and Jaguar XF (up 22 per cent), reflecting the successful launch of the long wheelbase model in China, the company said.

Sales were up year-on-year in China (30 per cent) and North America (16 per cent), while remaining stable in Europe (no change) and down in the UK (14 per cent) due to the time impact of vehicle excise duty introduced in April 2017.

Revenue for the quarter was £5.6 billion, up £244 million. Profit before tax was £595 million, up from £399 million in Q1 2016, including a £437 million one-off credit relating to recent changes designed to improve the sustainability of the Company's defined benefit pension plans. This was offset by the expected seasonality of sales in Q1 following a strong Q4 of 2016/17, plus the continuation of launch and growth costs.

Ralf Speth, Jaguar Land Rover Chief Executive Officer, said: "The foundation of our journey of sustainable, profitable growth continues to be our investment in products, plants and people as we become a technology-driven company. We continue to deliver rising volumes and revenues across the business, reflecting strong demand for new models such as the Range Rover Velar and established global award winners such as Jaguar F-PACE.''