More reports on: In the news, Management - general, Automobiles - general

For the first time since taking over as chairman of Tata Sons just over a year ago, Cyrus Mistry has taken direct charge of a group company, Tata Motors. 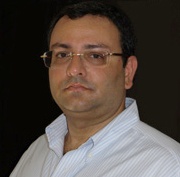 The company said in a statement on Thursday that the move is stop-gap till a replacement is found for the company's late managing director Karl Slym, who plunged to his death from the window of a hotel room in Bangkok late last month.

This is the first time that Mistry is taking on an operational role in a group company, but is not unprecedented in the group. His predecessor Ratan Tata too took a similar step when Tata Motors did not have an MD for over a decade.

Tata Motors announced the setting up of a corporate steering committee to be chaired by Mistry, which will "provide oversight of strategy and key aspects of the company's operations". The CSC includes all the seven members of the company's executive committee, and looks after almost all the key functions from commercial to passenger vehicles to research, quality, finance and supply chain.

Pisharody and Borwankar are also on the board of Tata Motors and are seen as possible contenders for the MD's post. Slym died after falling off the 22nd floor of a hotel suite in Bangkok, which the Thai police suspect to be suicide. The incident took place on January 26 when Slym had gone to attend the company's Thailand unit's board meeting.

Mistry said in the statement that the company will ensure it vigorously pursues and delivers on the strategy already defined by Slym and which he had been executing. Slym was working on a strategy to turn around the sagging fortunes of Tata Motors, which has seen its domestic sales slumping, even though its UK acquisition Jaguar-Land Rover is doing much better thanks largely to Chinese demand for luxury vehicles.

Sales of the 'Nano', launched by Ratan Tata amid much hype as the world's cheapest car, have never taken off, and deliveries plummeted over 70 per cent in the first nine months of the current financial year. Slym was also refurbishing the Nano to make it more acceptable as more than just a basic box with an engine.