The government hopes more automobile firms such as Tata Motors and Maruti Suzuki to enter the electric vehicle market under the government's scheme to incentivise manufacture and use of non-polluting vehicles. 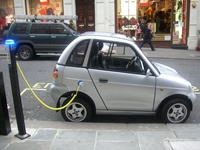 In this connection, the government is setting up a pilot project to provide last-mile connectivity for Delhi Metro Rail passengers using electric four-wheelers, Ambuj Sharma, additional secretary in the ministry of heavy industries, said.

Sharma was speaking on the sidelines of a recent conference of the Society of Indian Automobile Manufacturers (Siam), in Mumbai.

Mahindra & Mahindra, meanwhile, has undertaken an ambitious plan to manufacture 1.5 million electric cars and pickups by 2020, according to government sources.

''In a circuit of 5-6 kilometres, electric four-wheelers can be pressed into service,'' Sharma said.

Besides its Reva car, M&M, has plans to bring out an electric version of its pick-up Maxximo.

Maruti also has developed an electric version of its six-seater Eeco. However, manufacturers have not yet revealed their plans because they are waiting for the government to announce subsidies for electric vehicles.

The government, which withdrew electric vehicle subsidy in March 2012, is likely to restore it by April 2014.

Sharma said the ministry has conducted an analysis of total ownership costs of electric cars and two-wheelers and arrived at a consensus on subsidies for electric vehicles.

''About 9 million four-wheelers will be sold by 2020. We expect electric vehicles to account for 17-18 per cent of this,'' Sharma said.