TVS Motor Co and BMW Motorrad, the motorcycle arm of Germany's BMW Group, are in discussion to bring 500-600 cc twin cylinder bikes in India, according to a report by Bloomberg TV India. 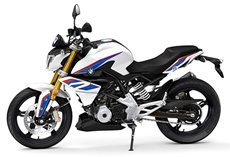 The channel said the adventure bikes would cost Rs5-6 lakh.

The news of the potential expansion in the two-year-old partnership between TVS Motor and BMW comes at a time when G310R - the first product planned from the alliance was yet to hit the streets.

G310R, a sub-500cc motorcycle with a single cylinder, was designed and engineered in Germany and will be assembled at TVS Motor's Hosur facility.

According to commentators, the BMW G 310R motorcycle features a newly developed single cylinder 313cc engine with an output of 34 hp at 9500 rpm.

It delivers a maximum torque of 28 Nm at 7500 rpm and comes equipped with four valves and two overhead camshafts together with electronic fuel injection.

The engine has a backward tilt and the cylinder head is turned 180 degrees so the intake track is at the front.

The bike would get 300mm single disc brake  for the front wheel, single 240mm on the rear with ABS as standard fitment on all the bikes.

There is no news on the India launch and neither has TVS stated anything about the TVS branded version of the bike.

The BMW G 310R should cost around Rs 2.5-2.75 lakh considering that it will be made at the TVS plant in Chennai, say media reports.