Govt may lower export duty for iron ore from Goa

In a big relief to Sesa Sterlite, India's biggest private sector miner, the centre is considering a reduction in the export duty for low-quality iron ore from Goa, in a bid to boost export of iron ore and revive the mining industry in the state. 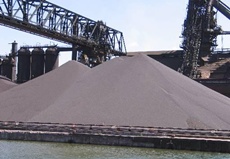 The 30-per cent export duty imposed on iron ore exports has stalled exports of the steel-making raw material from India and about 8 million tonnes of ore from Goa is lying at ports waiting for a buyer.

Goa mainly exports low-grade iron ore of less than 58 per cent iron content and most Indian steel companies lack the technology to use Goa's iron ore, which is mainly consumed by Chinese companies.

However, the export tax has made it unattractive for Chinese importers who buy iron ore on long-term contract.

The mines ministry has now approached the finance ministry seeking a differentiated duty structure for different grades of iron ore, minister of steel and mines Narendra Singh Tomar said on the sidelines of a meeting of the Central Geological Programming Board (CGPB) at Vigyan Bhawan today.

A reduction in export duty will lower iron ore prices and may boost shipments to China, putting further pressure on already low global prices and pushing down prices further.

While Sesa Sterlite welcomed the idea, steel companies like JSW Steel and Jindal Steel and Power were critical. Local steel makers were struggling with rising steel shipments from countries like China and Russia, forcing them to seek government help.

"A withdrawal of the duty will support the restart of the mining industry in Goa," said Aniruddha Joshi, a Sesa vice president.

JSW Steel, however, countered saying India should not export raw materials without adding value, adding that they were investing in technology to use Goa's ore.

"We'll surely find a solution of the problem of dumping soon," Tomar said. "We can't put a brake, so there is no other option (than raising the duty).

He did not say by how much the duty might be raised, a decision on which could come before the budget. Currently India imposes tariffs in the range of 5-7.5 per cent on finished steel.