Starbucks Corporation yesterday announced that it is investing in Italian restaurant Princi, the renowned boutique bakery and café founded by Rocco Princi in 1986. 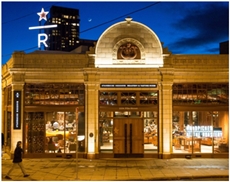 Starbuck, based in Seattle, did not reveal how much it is investing in Princi, but said that the investment team also includes Milan-based Angel Lab and Pekepan Investments.

Starbuck will focus on expanding the number of standalone Princi locations worldwide as well as making Princi the exclusive food supplier for a new line of Reserve-only stores and Tasting Rooms that Starbucks plans to open in Shanghai and New York in 2017.

Starbuck also plans to serve beer and wine in the Reserve-only stores.

Starbucks already has some 2,000 Reserve stores in 30 countries, in which a vast variety of coffees from the company's menu are served, along with Reserve coffees.

In addition to the expansion of standalone Princi specialty stores and inclusion of fresh baking in Starbucks Roasteries, the company will also partner with Rocco Princi to bring a premium food to its new Reserve only stores starting in 2017.

Since the acquisition of La Boulange in 2012 for $100 million, Starbucks reinvented its food portfolio at more than 14,000 stores in the US and Canada.

''As a young man, I dreamed of the opportunity to bring traditional Italian baking to customers in my country but when I opened our location in London, I realized how much we could also offer an international clientele,'' said Rocco Princi, founder, Princi Restaurant. ''I have long admired Starbucks, the values Howard has imbedded into his organisation and we are honored to be a part of bringing to life an entirely new retail environment with the Roasteries.''

''We have never baked in our stores in 45 years. But all of that will change with the creation of this unique partnership,'' said Howard Schultz, Starbucks chairman and CEO.

''Rocco and his team at Princi possess a passion for handcrafted food and artisanal baked goods that mirrors how I feel about our coffee.  I can think of no better pairing for our most premium coffee experience and am excited by the possibilities we envision in Princi food elevating every day part – breakfast, lunch, and dinner – in Starbucks Roasteries and Reserve Stores,'' he added.