Japan's Softbank has agreed to acquire ARM Holdings, one of Britain's leading technology companies, in a deal worth £24.3 billion ($32 billion) the biggest foreign takeover by a Japanese company. 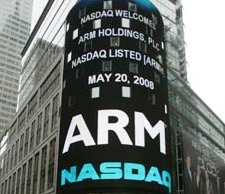 Under the all-cash deal, Softbank will acquire 1,412 million shares of ARM, including the entire issued and to be issued share capital of ARM, at a total acquisition price of approximately £24.3 billion (approximately $32 billion or JPY 3.3 trillion) by means of a court-sanctioned scheme of arrangement.

The cash purchase has been agreed to by the boards of both companies, giving a big boost to Softbank CEO Masayoshi Son's plans on mobile communications and the `Internet of Things'.

ARM, based in Cambridge, is a leader in mobile computing, designing technology used in popular smartphones, including Apple's iPhone.

Son told reporters that the acquisition was his "big bet for the future," adding that ARM was well positioned to capitalise as more and more devices are connected to the internet.

"This is the company I've wanted to for 10 years," he said. "The 'Internet of Things' is growing big time."

The companies expect the acquisition to close as soon as practicable in the third calendar quarter 2016 (the period ending 30 September 2016). With the acquisition, ARM will become a wholly-owned subsidiary of SBG.

Coming together of the two companies will accelerate ARM's leadership in technologies for the future and help create over 1,500 additional ARM jobs in the UK over the next five years and increase headcount outside the UK, according to Softbank.

SBG plans to support ARM's multiple growth initiatives by investing in engineering talent and complementary acquisitions with the aim of ensuring ARM maintains a R&D edge over existing and emerging competitors. Such an investment strategy in long-term growth will be easier to execute as a non-listed company, it added.

The ARM takeover comes less than a month after the UK voted to leave the European Union, a shock event that hnas rattled investors and caused the Sterling to plummet.

Son said he had discussed the deal with UK officials, and found them to be receptive. Philip Hammond, the UK's new Treasury chief, said the takeover showed that "Britain has lost none of its allure to international investors."

Softbank, which also owns a controlling stake in US telecom Sprint (S), has been raising cash in recent months. In June, the company announced a plan to unload roughly $8 billion in Alibaba shares.

Softbank Group Corp on Friday said it has entered into a loan agreement for a maximum amount of JPY 1.0 trillion to finance a portion of the consideration payable in the acquisition of ARM Holdings plc.