SoftBank president and chief operating officer Nikesh Arora, who was tipped to become its next CEO, will step down tomorrow over differences with current CEO of the group Masayoshi Son. 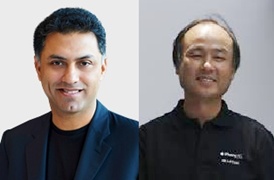 Seen as a potential successor to the Japanese internet conglomerate chairman and CEO Masayoshi Son, Softbank said Arora and Son had disagreed over when Arora would replace CEO as the head of the group.

"Masayoshi Son, chairman and CEO of SBG, had been considering Arora as a strong candidate for succession. Son's intention was to keep leading the group in various aspects for the time being, while Arora wished to start taking over the lead in a few years' time. The difference of expected timelines between the two leads to Arora's resignation from the position of representative director and director of SBG with the expiration of the term of office and his next steps," SoftBank said in a statement.

''I was thinking of handing over my job as CEO when I turn 60, but thought maybe I'm still a bit too young, and still have energy to continue,''  The Wall Street Journal quoted Son as saying.

''Nikesh and I have been partners in creating SoftBank 2.0. He has been able to help think through our vision, future growth plans and articulate the SoftBank strategy. He brought world class execution skills to SoftBank, as evidenced in our myriad of investments over the last year, as well as the complex monetisation of our Alibaba stake, and most recently our successful sale of Supercell. I am indebted to him for his contributions,'' Masayoshi Son commented.

''Nikesh is a unique leader with unparalleled skills around strategy and execution. He should be CEO of a global business, and I had hoped to hand over the reins of SoftBank to him on my 60th birthday - but I feel my work is not done. I want to cement SoftBank 2.0, develop Sprint to its true potential and work on a few more crazy ideas. This will require me to be CEO for at least another five to ten years - this is not a time frame for me to keep Nikesh waiting for the top job.''

''Nikesh and I have decided that he would move to an advisory role and continue to support SoftBank, while he zeroes in on his next challenge. He will continue to be friend of SoftBank, and I will have my hand on his shoulder.''

Commenting on the decision, Nikesh said, ''Helping Masa begin the transformation of SoftBank and sowing the early seeds has been a great experience. I have enjoyed working with Masa and the SoftBank team and I look forward to my next challenge. In the meantime I will continue to support SoftBank and our investee companies.''

Nikesh joined SBG from Google, where he was the chief business officer, in September 2014. During his tenure, SBG invested in a set of ground-breaking growth stage companies in India like Snapdeal, Ola, Oyo, Grofers, Housing and extended its footprint in Asia successfully with the mobile e-commerce company Coupang in Korea and the ride-share player Grab in Southeast Asia.

SBG started building its portfolio in the US with interesting investments like SoFi, a fintech company that's taking a radical approach to lending and wealth management and Banjo, which utilizes data analytics.

Recently, the company sold a small part of its shareholding in Alibaba Group to reduce leverage and improve financial health over the long term. SBG entered an agreement to sell its stake in Supercell for a total return of $7.3 billion.