T-Mobile Inc and Sprint Corp, the No 3 and No 4 American carriers, will combine their businesses to create a new telecom giant that could challenge the dominance of Verizon Communications Inc and AT&T Inc in the coming blazing-fast fifth-generation wireless era. 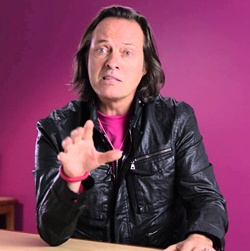 T-Mobile CEO John Legere, will head the new T-Mobile
T-Mobile US and Sprint Corporation on Sunday announced they have entered into a definitive agreement to merge in an all-stock transaction during the weakend.
The all-stock transaction at a fixed exchange ratio of 0.10256 T-Mobile shares for each Sprint share or the equivalent of 9.75 Sprint shares for each T-Mobile US share values Sprint at $26.5 billion.
Based on closing share prices on 27 April, this represents a total implied enterprise value of approximately $59 billion for Sprint and approximately $146 billion for the combined company.
The new company will have a strong closing balance sheet and a fully-funded business plan with a strong foundation of secured investment grade debt at close, the two companies stated in a joint release.
The combined company will be named T-Mobile, and it will be a bigger force with the combination of spectrum holdings and the resulting network scale.
The new T-Mobile expects run rate cost synergies of $6+ billion, representing a net present value (NPV) of $43+ billion, which will supercharge T-Mobile’s Un-carrier strategy to disrupt the market place and lay the foundation for US companies and innovators to lead in the 5G era, the companies said.
A joint statement said, “The New T-Mobile will have the network capacity to rapidly create a nationwide 5G network with the breadth and depth needed to enable US firms and entrepreneurs to continue to lead the world in the coming 5G era, as US companies did in 4G. The new company will be able to light up a broad and deep 5G network faster than either company could separately.”
“The combination of these two dynamic companies can only benefit the US consumer. Both Sprint and T-Mobile have similar DNA and have eliminated confusing rate plans, converging into one rate plan: Unlimited,” said Sprint CEO Marcelo Claure.
The boards of directors of T-Mobile and Sprint have approved the transaction. Deutsche Telekom and SoftBank Group are expected to hold approximately 42 per cent and 27 per cent of diluted economic ownership of the combined company, respectively, with the remaining approximately 31 per cent held by the public.
The board will consist of 14 directors, 9 nominated by Deutsche Telekom and 4 nominated by SoftBank Group, including Masayoshi Son, chairman and CEO of SoftBank Group, and Marcelo Claure, CEO of Sprint. John Legere, CEO of the New T-Mobile, will also serve as a director.
Post transaction ownership structure and financial profile:

The new company will have some of the most iconic brands in wireless – T-Mobile, Sprint, MetroPCS, Boost Mobile, Virgin Mobile – and will determine brand strategy after the transaction closes.
The transaction is subject to customary closing conditions, including regulatory approvals. The transaction is expected to close no later than the first half of 2019.
Currently, Verizon and AT&T dominate the business and government wireless business category with 4x more customers than Sprint and T-Mobile added together. With its assets and capabilities, the new company will unlock real competition for business and government customers.
“We intend to bring this same competitive disruption as we look to build the world’s best 5G network that will make the US a hotbed for innovation and will redefine the way consumers live and work across the US, including in rural America. As we do this, we will force our competitors to follow suit, as they always do, which will benefit the entire country. I am confident this combination will spur job creation and ensure opportunities for Sprint employees as part of a larger, stronger combined organisation, and I am thrilled that Kansas City will be a second headquarters for the merged company.”
The companies see leadership in 5G as critically important for American dominance in the 5G space as in the case of early US leadership in 4G that fueled a wave of American innovation and entrepreneurship that gave rise to today’s global mobile internet leaders, creating billions in economic value and job growth. America’s early 4G leadership is credited with creating 1.5 million jobs and adding billions to the US GDP.
“Only the combined company will have the network capacity required to quickly create a broad and deep 5G nationwide network in the critical first years of the 5G innovation cycle – the years that will determine if American firms lead or follow in the 5G digital economy. With Sprint’s expansive 2.5 GHz spectrum, T-Mobile’s nationwide 600 MHz spectrum, and other combined assets, the New T-Mobile plans to create the highest capacity mobile network in US history.”
Compared to T-Mobile’s network today, the combined company’s network is expected to deliver 15x faster speeds on average nationwide by 2024, with many customers experiencing up to 100x faster speeds over early 4G.
“Neither company standing alone can create a nationwide 5G network with the breadth and depth required to fuel the next wave of mobile internet innovation in the US and answer competitive challenges from abroad. Neither can AT&T and Verizon in the near term, even though they will still respectively own 34 per cent and 172 per cent more spectrum than the combined company. Even with their vast resources, AT&T and Verizon cannot rapidly build nationwide 5G and their planned 5G networks will only be available sporadically in just a handful of very limited areas.”
“Ubiquitous high-speed 5G service and Internet of Things (IoT) capabilities will ignite innovation across industries and create the conditions for US firms and innovators to lead the globe in the 5G era.”
MORE REPORTS