Sony is set for a major push in India. Even as it unveiled the latest models in its LCD television range yesterday, the management spoke of aggressive plans to increase its presence in the growing market, with special emphasis on the television segment. With a projected 33 per cent growth in turnover and doubling of the advertising budget, the Japanese major is certainly aiming high. 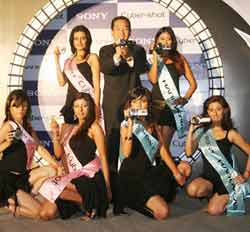 The new Bravia W, V and S series launched yesterday are based on Sony's "Draw the Line" concept - designs inspired by the horizon where beautiful images float above it, the company says. With this the range has expanded to a total of 10 line-ups, including the 32-inch LCD introduced in the new W series. With a display resolution of 1920 x 1080, each LCD TV delivers over 2-million pixels to display extremely detailed images.

''Sony continues to be a forerunner in the LCD television market by delivering more Full High Definition models that feature cutting-edge technologies such as Bravia Engine 2 and Intelligent Picture,'' he added, disclosing that company plans to sell about 3 lakh units of LCD television this year, thereby increasing its market share from 25 to 30 per cent.

The Bravia Engine 2 is a fully digital picture enhancement engine that leverages Sony's advanced algorithms to portray vibrant, crisp images that remain true-to-life. When combined with Sony's Advanced Contrast Enhancer, MPEG noise reduction and intelligent picture, the Bravia V and S series deliver noise-free images with amazing contrast, allowing for images that are sharp and vibrant any time they are viewed.

In addition to the glittering products, Sony India MD Tamagawa also painted a rosy future for the company. "This fiscal year we are aiming to touch a turnover of Rs.4000 crore, up from last year's Rs3000 crore," he said, adding that a number of new products would soon be introduced to help achieve this objective.