Japanese electronics giant Sony Corporation is entering the connected mobility world with an autonomous car that combines imaging and sensing technologies to incorporate a `Safety Cocoon’ or a safe-zone concept. 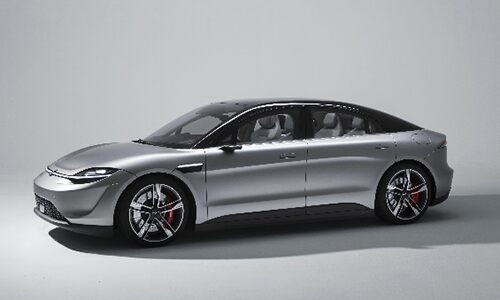 Sony Corporation is exhibiting the connected car concept, named `Vision-S’ and several other products such as high resolution video and sound in three dimensional space, in addition to `real-time' technologies that support every stage of the production process, as well as various combinations of these technologies, at the CES 2020 in Las Vegas, Nevada, being held from Tuesday (7 January 2020).
In remarks made just before the vehicle was unveiled, Kenichiro Yoshida, president and CEO of Sony Corporation, emphasised the importance of mobility to the company.
“It’s not an exaggeration to say that mobile has been the mega-trend of the last decade,” he said. “I believe the next mega-trend will be mobility,” he added.
“As vehicles become more connected, autonomous, shared and electric in the coming years they will also bring about positive social and environmental impacts.”
The concept car, unveiled at CCS 2020, uses the `Safety Cocoon’ to evade risk and safely drive through in various daily situations by detecting 360 degrees around the vehicle, Sony stated in a website release.
Two 200 kilowatt motors – located at its front and rear – power the four-seater car, which weighs 2,350 kilograms.
The technology used in the Vision-S will enable a range of features such as self-parking, advanced cruise control and “auto-lane change functions.” In addition, sensors inside the vehicle will monitor things like driver fatigue and concentration.
After the vehicle was driven on stage, Sony’s Yoshida said the prototype embodied the company’s “contribution to the future of mobility.”
Visitors to the Sony booth at CCS 2020 can experience advancements in the Sony imaging and sensing technologies listed below, which support the realisation of this concept.
“Through Sony's imaging and sensing technologies, which are beyond the human eye, we aim to contribute to the achievement of safe, reliable, and comfortable mobility experiences,” says the company release.
Sony uses CMOS image sensors, which achieve high sensitivity, high definition and high dynamic range while also suppressing LED flicker*3 to deliver accurate object recognition, even in situations where conventionally detection has been difficult.
The use of solid state LiDAR, which uses highly accurate distance measurement, helps to gain a precise 3D grasp of real-life spaces.
Vision-S’s sensor fusion technology which merges the capabilities of sensors of varied attributes, enables early and accurate recognition, even in challenging conditions such as fog, backlight and night-time driving.
Time-of-Flight (ToF) in-cabin sensing solutions use distance measurement technology to detect and recognise people and objects inside the car. This information is used to provide an optimised infotainment system with intuitive interfaces such as gesture control and improve safety and comfort inside the vehicle.
The first prototype vehicle to result from "VISION-S" will be showcased at the Sony booth. This prototype incorporates Sony's imaging and sensing technologies, as well as on-board software regulated using Sony's AI, telecommunication and cloud technologies, in order to continuously update and evolve its features.
A total of 33 sensors, including CMOS image sensors and ToF sensors, are embedded within the vehicle, in order to detect and recognise people and objects inside and outside the car, and provide highly advanced driving support. Sony's "360 Reality Audio" provides a deep and immersive audio experience through speakers built into each seat to encapsulate passengers in sound. The front seats face a panoramic screen on which rich and diverse content can be enjoyed through an intuitive user interface.
Sony plans to continue to combine its advanced technologies to deliver greater safety and reliability, while also striving to inspire new emotion through revolutionary in-car entertainment experiences.
Sony is the latest major firm to develop technology and ideas for autonomous vehicles. In October, the Volkswagen Group announced the creation of a subsidiary called Volkswagen Autonomy, with the German car giant saying it planned to “make autonomous driving market-ready.”
The Sony booth introduces a range of exhibits ranging from technologies  that help deliver `reality,' such as high resolution video and sound in three dimensional space, in addition to `real-time' technologies that support every stage of the production process through to the viewing experience, as well as various combinations of these technologies.
MORE REPORTS