Struggling electronics giant Sony Corporation is planning a comeback with a new android-based tablet computer that rivals both the current models that Apple Inc and Samsung Electronics Co are selling. 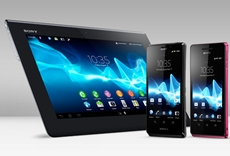 The electronics maker, which reported four straight years of losses, said the Sony Xperia Tablet Z will go on sale in Japan as soon as March 2013.

Sony Xperia Tablet Z sports a 10.1-inch screen with full-HD (1920 x 1200) display. It runs on Android 4.1 (Jelly Bean) and packs in a 1.5GHz quad-core Snapdragon S4 Pro processor. The tablet comes with 2GB RAM and 32GB of internal storage, which can be expanded further by a microSD card.

The Xperia Tablet Z with a 6.9 millimeters (.27 inches) thickness is probably the thinnest smart phone in its category. It weighs 495 gm (17 ounces), Sony said in a statement today.

The waterproof device claims to have the world's first Exmor RS mobile with HDR for video, enabling the user to take beautiful stills and movies even against strong light.

''The 13 megapixel fast-capture camera and the next-generation Sony Exmor RS for mobile sensor makes Xperia Z the android mobile that delivers crystal clear photos wherever, whenever, in all light conditions,'' the release said.

The Xperia Z also claims to have a more intelligent battery management system that helps improve standby time by four times or more.

Sony, which is reported to have generated 18 per cent of sales from mobile products and communications in the quarter ended September, is now focusing on mobile devices to drive growth.

The Sony stock rose 3.3 per cent to 1,187 yen at the close of trading in Tokyo, even as the benchmark Nikkei 225 Stock Average declined 1.5 per cent. Sony has risen 24 per cent this month.