Sony's Google internet TV to hit US stores on 16 October

The much awaited Sony internet TV powered by Google TV is set to arrive in stores in the US on 16 October, at a much lower price than originally rumoured. 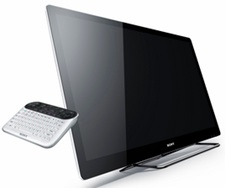 The company's integrated internet TV is being marketed as the first internet TV and has aroused high expectations among consumers who are eagerly looking forward to see if Sony's internet TV can live up to the hype.

The company has also announced it would release a Blu-ray player powered by Google TV that would enable consumers with an HDMI-ready TV to browse the web, stream videos from sites like YouTube, play Flash games, connect with friends on social networks, play Blu-ray discs and even display photos on the biggest display in the house.

According to experts though there are other internet TVs on the market, few offer a seamless-TV experience that gives access to the 'full' world wide web.

Sony and Google are attempting to blur the borders between internet browsing and TV viewing say analysts.