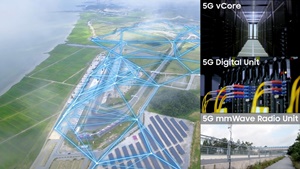 Samsung is seen to have overcome the challenge posed by Nokia, Verizon’s biggest vendor, by securing the five-year supply contract.
The order for network equipment from Verizon would help Samsung expand its telecom equipment business across the world.
Samsung did not make details of the terms the contract such as the specifics about the 5G network gear included.
"With this latest long-term strategic contract, we will continue to push the boundaries of 5G innovation to enhance mobile experiences for Verizon’s customers," Samsung said in a statement.
Samsung said in a regulatory filing the period of the contract, which Samsung's U.S. unit signed with Verizon Sourcing LLC, is from 30 June 2020 to 31 December 2025.
Samsung had a mere 3 per cent market share of the global telecom equipment market in 2019, far behind behind No 1 Huawei with 28 per cent, Nokia's 16 per cent, Ericsson's 14 per cent, ZTE's 10 per cent and Cisco's 7 per cent, according to market research firm Dell'Oro Group.
Samsung was also helped by the Trump administration’s decision to unveil auction plans for spectrum needed for roll-out of 5G services and the exit of Huawei from the US market, to ramp up fifth-generation network business.
The US is expected to roll out 5G wireless network by 2022, which would eventually enable high-speed video transmissions and self-driving cars, among other uses.
Huawei is facing purge everywhere because of its alleged connection to Chinese government agencies engaged in spying activities.
Verizon, meanwhile, said its network security engineers recently engaged in a series of successful trials to future-proof its 5G network against security threats and advance security measures to protect the confidentiality, integrity and availability of Verizon’s 5G network.
The advent of 5G wireless communications constitutes a new era of network connectivity that will revolutionise many aspects of commerce and our personal lives. Along with new technology comes the need for new security measures. Verizon is focused on protecting against threats to customers’ security and ensuring the reliability and resilience of communications services against all manner of hazards, including cyber threats, the company stated in a release.
As network operations become more complex, additional purpose-built hardware supporting security functions such as firewalls, IDS, DDoS, Probes and Packet brokers are deployed throughout the network. The addition of this hardware introduces additional latency and opens the door for greater maintenance as well as additional points of vulnerability.
MORE REPORTS