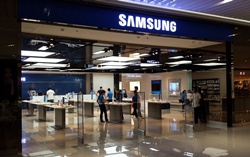 Consolidated first quarter revenue rose nearly 20 per cent year-on-year to $56 billion (KRW 60.56 trillion), primarily led by Samsung’s memory business and increased sales of its flagship mobile products, including the Galaxy S9.
Samsung said its profitability improved significantly in the quarter thanks to the semiconductor business and the early global launch of the Galaxy S9. All in all, the operating margin in the first quarter was 25.8 per cent, up 6.2 percentage points YoY.
By business unit, the semiconductor business’ significant earnings performance was driven by demand for memory chipsets for high value-added servers and graphics products, the company said, adding, the System LSI and foundry businesses also contributed to first quarter earnings, backed by strong demand for chips used for smartphones and crypto-currency mining.
For the display panel segment, which manufactures OLED and LCD screens, profits were affected by slow demand for flexible OLED panels and greater competition between rigid OLED and LTPS LCD. An imbalance between supply and demand in the LCD market, brought on by competitors’ increased production capacity, also weighed on earnings.
For the IT and mobile communications division, the early launch of the Galaxy S9 and solid sales of the Galaxy S8 smartphones resulted in considerable growth in earnings.
In the consumer electronics division, earnings by the visual display business slid YoY following an adjustment in its TV line-up where some mid-range to low-end products were removed. As for the Digital Appliances Business, rising raw material prices and other factors impacted profitability.
For the second quarter, Samsung expects the memory business to maintain its strong performance, but generating overall earnings growth across the company will be a challenge due to weakness in the display panel segment and a decline in profitability in the mobile business amid rising competition in the high-end segment.
Demand for the server and mobile DRAM is expected to be robust and orders for high-density storage chips will grow as the price of NAND softens in the second quarter. For the system LSI and foundry businesses, shipments of 10-nanometer APs and crypto-currency mining chips will expand but earnings will be impacted due to sluggish demand for smartphone components.
The display panel segment will seek profitability in OLED by cutting costs and improving yield, amid the weak demand for flexible products. As for LCD panels, oversupply is anticipated despite an expected boon in TV sales in time with an upcoming major global soccer event.
In the mobile business, profitability is expected to decline QoQ due to stagnant sales of flagship models amid weak demand and an increase in marketing expenses. Meanwhile, earnings for the consumer electronics division are projected to improve due to increased shipments of new products such as QLED TVs and strong seasonal demand for air conditioners.
The overall business outlook for the second half regarding components is positive, as the company looks forward to strong demand for DRAM and increased sales of OLED panels.
For set products, Samsung aims to sustain profitability by strengthening its market leadership in the sales of premium products despite challenging global market conditions.
In the mid to long term, Samsung will strengthen its business capabilities by delivering differentiated technology in the component business and solidifying its leadership in cutting-edge technologies such as AI and 5G. The company believes opportunities will widen for the set business, as digital devices become increasingly connected.
Total capital expenditure in the first quarter was KRW 8.6 trillion including KRW 7.2 trillion for the Semiconductor Business and KRW 0.8 trillion for the Display Panel segment.
Samsung has not yet finalised its capex plan for 2018, but the company expects it to decline YoY. Capex rose substantially in 2017 due to efforts to respond to market growth and emerging technologies, which included expanding the production capacity for flexible OLED panels.
MORE REPORTS