After reports of the Galaxy Note 7 catching fire and exploding Samsung has halted global production of the device to conduct quality checks. While Samsung did not elaborate as to exactly what went wrong during the manufacturing process, it did mention that the issue had been with the battery cell. 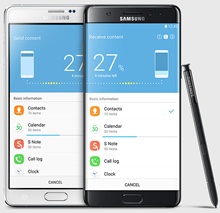 The current issue was found to be with the units manufactured by a Samsung affiliate company. The company had thus far witnessed 35 cases of exploding batteries.

It may be pointed out that Nokia had faced a similar issue back in 2007 with the BL-5C battery.

''An overheating of the battery cell occurred when the anode-to-cathode came into contact which is a very rare manufacturing process error,'' Samsung said. Each battery came with separators that ensured anode and cathode did not come into contact when the current flowed.

The same was, however, not done properly during the manufacturing process.

Meanwhile, Samsung Electronics Co lost $22 billion of market value over two days as investors factored in a bigger hit to its bottom line from widening bans and warnings on its Note 7 smartphones.

Shares were down 11 per cent since Friday, the biggest two-day decline since 2008, after US regulators joined the company in cautioning users to power down their Note 7s and refrain from charging them. Also aviation authorities and airlines had called on passengers to stop the use of gadgets during flights.

According to commentators, the stock drop suggested the damage to Samsung's brand could go well beyond the early estimates of $1 billion for a single product recall. The company had spent heavily on marketing its name in past years, and had hoped to get a head start on Apple Inc by unveiling its device weeks ahead of the release of the new iPhone. That advantage had now disappeared.

''Samsung's nightmare is just getting worse and worse,'' said Bryan Ma, vice president of devices research for IDC. It's possible that airlines, rather than isolating Note 7s, may decide to ban all Samsung phones given the difficulty of differentiating between models, Bloomberg reported. ''If true, then the Note 7 could end up dragging down the rest of the portfolio.''