Samsung to sell chemicals businesses to Lotte Group for $2.6 bn

Samsung Group yesterday struck a deal to sell its chemicals businesses to Lotte Group for about 3 trillion won ($2.6 billion), as part of restructuring of South Korea's largest conglomerate. 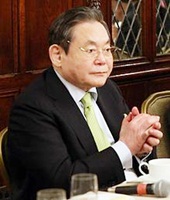 The Seoul-based company said that its subsidiary Samsung SDI will spin off its chemical business into a separate company, and sell a 90 per cent stake in the company to Lotte Chemical Corp.

Samsung SDI will also sell a 14.65-per cent stake in Samsung Fine Chemicals to Lotte Chemical for 219 billion won and a will sell the 90-per cent stake in its chemicals business immediately and the remaining 10 per cent after three years after the deal closes.

Samsung will spin off the chemicals business in February 2016 and will call a shareholders meeting to approve the merger, which will take place in the first half of 2016.

Samsung said that it is selling its chemicals business and stake in Samsung Fine Chemical in order to raise capital and invest in the rapidly growing automotive battery business.

Samsung plans to strengthen battery materials R&D and expand production lines by investing more than 2 trillion won over the next five years, and aim to become the global leader by the year 2020.

The chemicals business of Samsung SDI has assets of 1.5 trillion won and liability of 400 billion won, two local branches in Uiwang and Yeosu, and eight branches overseas.

Samsung SDI revenue for the first half 2015 was 1.3 trillion won, operating profit was 95.3 billion won.

The sale comes as the Samsung group chairman Lee Kun Hee, who suffered a heart attack last year, prepares to hand over the reins of the group to his only son and heir apparent Lee Jae Yong.