Samsung Electronics Co has announced a $10-billion (11.3 trillion won) share buy-back and promised substantial increase in dividend payout over the next years despite lower than expected profits. 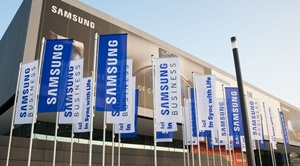 Samsung, which competes with Apple in the global smart phone market, will tap into its $50-billion cash pile to buy back shares and invest in its components business.

The South Korean company's profit growth has stalled over the past two years as it lost market share in smart phones, battering investor sentiment.

The company will buy back 11.3 trillion won ($10 billion) worth of shares and boost capital spending by 14 per cent this year, Samsung said.

The announcement comes after the company posted profit that trailed analyst estimates.

The maker of Galaxy handsets and tablets said third-quarter operating profit jumped 82 per cent to 7.4 trillion won ($6.5 billion), in line with its guidance. Revenue rose 8.9 per cent from a year earlier to 51.7 trillion won.

Samsung warned that earnings would fall sequentially in the fourth quarter as currency conditions - which added 800 billion won to profit in the third quarter - became less favourable.

The mobile division posted its first on-year profit growth in two years, climbing 37 per cent to 2.40 trillion won, thanks to strong sales of the Galaxy Note 5 as well as new lower-end products.

The firm said it aimed to keep fourth-quarter mobile profits at a similar level, although the outlook beyond that was unclear as it expected the global smartphone market to slow in 2016.

The chip division was the company's top earner for the fifth-straight quarter, with a record 3.66 trillion won profit thanks in part to demand from smartphone makers.

The results will raise hopes that Samsung's profit recovery is on track, even though investors are sceptical about its ability to return to the record earnings it posted in 2013 on the back of its smartphone business.

Samsung is struggling for an answer to Apple Inc in high-end smart phones, trying price cuts, a $120 rebate programme and new models to tempt consumers from buying iPhones. That has prompted a renewed focus on making components for earnings growth, with new semiconductor and display plants to get its parts into other vendors' devices.

Capital expenditure will rise to 27 trillion won this year as the company invests in chips and display plants.