Samsung Electronics has forecast a 53 per cent jump in profit for the first three months of the year, boosted mainly by growing smartphone sales. 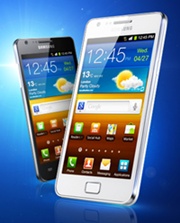 The company's Galaxy smartphones have been such a hit with users, that they enebled Samsung to displace Apple as the world's biggest smartphone maker last year.

According to analysts, profits at the company would rise further over the coming months. They have forecast robust sales for the Korean company's latest smartphone model, the Galaxy S4, which would  hit the stores later this month.

The smartphone, which launched earlier this year, allows control of its screen with eyes movement and can take two different pictures at once.

The phone is widely expected by analysts to emerge as a serious competitor to Apple's iPhone5.

Some analysts, project 22 million Galaxy S4 smartphones sales in the second quarter alone. They also expect the company's earnings to hit the 10-trillion won mark in the April to June quarter, boosted by GalaxyS4 sales as also improving conditions in the memory chip market.

Samsung, which is also the world's biggest maker of memory chips, would release its final quarterly results on 26 April.

Meanwhile, Apple extended its lead over Samsung in US smartphone subscriptions in the three months ended in February, according to a statement by research company Comscore yesterday.

Samsung's first-quarter smartphone shipments are expected to have risen 11  per cent from the preceding quarter, according to analysts.

With the S4 and the new Note due to be released this year, the company's mobile division would not reach its peak until the third quarter at the earliest, when Apple was expected to introduce a new iPhone, they said.

The company's shipments of flagship models, including the S4, may touch 37.8 million units in the second quarter, analysts project, with the average selling price expected to rise 17 per cent. This would bring operating profit at the mobile business to about 7.9 trillion won, they project.