South Korea's largest industrial conglomerate, Samsung Group, said it would increase spending to a record 47.8 trillion won ($41.7 billion) this year to push ahead with growth in its chip and display businesses as also to cultivate new revenue sources. 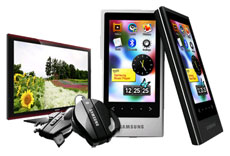 The investment by Samsung Electronics Co, the largest maker of computer-memory chips, and its affiliates represents a 12-per cent increase from last year, according to an emailed statement today.

The companies plan to spend of 31 trillion won in capital expenditure, the group said in the statement. However,  details on the manner of allocation have not been disclosed.

According to analysts, the investment would further cement Samsung's leadership in electronics at a time when competitors were trimming spends amid failing growth in the global economy.

Over 70 per cent of the group companies' planned capex probably would be spent by Samsung Electronics, as it sought it focus on mobile-phone chips and next-generation displays for phones and TVs, they say.

They add, the company was looking at the future and turning its focus to areas that were growing rapidly.