The Supreme Court today asked beleaguered Sahara Group to reveal to it the source of money it claims to have used to refund investors. Sahara claims to have refunded Rs20,000 crore to investors. 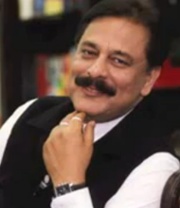 The apex court, however, said it is difficult to believe that so much money can be repaid is so short a time and most of it out of thin air.

The apex court came out with the remarks as the group had been struggling for more than two years to raise Rs10,000 crore, the bail amount Sahara chief Subrata Roy was supposed to pay.

It is difficult to digest, a bench comprising Chief Justice TS Thakur and Justices Anil Dave and AK Sikri said, adding, "We will close the entire Pandora's Box if you show us the source of refund money."

While defending Sahara, lawyer Kapil Sibal also told the court that the company has received Rs310 crore as advance for a deal on sale of its Grosvenor house hotel.

Sahara has been told to reveal the source of funds to the court before the scheduled hearing of the case on 16 September, to which Sibal agreed.

Sahara India chief Subrata Roy was arrested in February 2014 in the money fraud case for failure to comply with 2012 order directing his group to return the Rs17,600 crore collected from investors along with 15 per cent interest.

Roy has been charged in the case pertaining to non-refund of nearly Rs20,000 crore to investors and has been in jail for most of the time since February 2014.

The bench also asked the stock market regulator Sebi to ''thoroughly investigate with a pinch of salt'' the group's proposal to raise loans against its three hotels in London and New York whose value was estimated at over Rs5,000 crore by Sahara.

Sahara had claimed that its properties were worth over Rs70,000 crore and had in fact returned the Rs22,000 crore raised by two of its companies - Sahara India Real Estate Corp Ltd (SIREC) and Sahara India Housing Investment Corp Ltd (SHIC) - in the form of debentures, declared illegal by the SEBI and upheld by the Supreme Court.

The Supreme Court refused to pass any order on the application to deposit additional money and fixed the matter for next hearing on 16 September.