A rescue plan for Indian conglomerate Sahara was again scuppered on Wednesday after Spanish bank BBVA denied offering a credit line to the group, as Sahara had claimed. 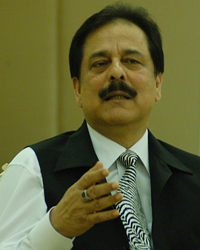 Sahara had told the Supreme Court this week that BBVA had agreed a €900 million loan to Hong Kong firm Nouam Ltd. That BBVA cash would then be used to refinance an existing loan to Sahara from Bank of China, which is secured by three luxury overseas hotels, New York's Plaza and Dream hotels and the Grosvenor House in London, it claimed (See:Sahara gets another 3 months to raise bail money for Subrata Roy).

But BBVA's chief representative in India Joiel Akilan said, "BBVA has no credit exposure, nor any form of relationship with Sahara Group nor other entities related to them, including Nouam."

Sahara's founder and boss Subrata Roy has been held in jail for more than a year, after Sahara failed to comply with a court order to refund Rs 24,000-crore to investors in a bond programme that was ruled illegal, after it lost an appeal with the Securities Appellate Tribunal in 2012 ( Sahara loses appeal in Rs24,000-crore refund issue ).

Thereafter Sahara had been embroiled in litigation with market regulator Sebi and the tax authorities, culminiating in Roy's arrest and incarceration in Delhi's Tihar jail in 2013 on a bail of Rs10,000 (SC orders Sahara chief Roy's arrest for avoiding court appearance).

Sahara has made several failed attempts to raise bail money, using its hotels and other properties, and has sought to refinance the Bank of China loan.

The court has set Roy's bail at an Indian record of Rs10,000 crore. Sahara claims says it has paid 95 per cent of the dues to its bondholders, but the market regulator Securities & Exchange Board of India denies this.

Sahara had said earlier in a statement that it had no relationship with BBVA, but that global financial services firm Nouam did.

"All documents were vetted by an independent law firm of repute and banks before being presented to the Honourable Supreme Court of India," it said, without identifying the law firm or banks.

The Indian company also said the deal was in its initial stages, so firm conclusions should not be drawn.

Earlier Sahara had said it never claimed any exposure to BBVA but could not give details due to a confidentiality clause and because the matter had not yet been ruled on by the court.

A senior executive at BBVA said the bank was never in talks with Sahara for a loan and that the mention of its name in the court proceedings was a "surprise".

Sahara, whose interests range from Formula One motor racing to property and TV, had on Monday submitted a letter in the court written on BBVA notepaper and signed by bank executive Jose Ramon Vizmanos. The letter was used in court by Sahara as evidence of the loan.

On Wednesday Vizmanos told Reuters from Madrid that he had no knowledge of a letter used as security for Sahara.

"I have never worked with any Indian company," Vizmanos said by phone. "The only thing I know about Sahara is the desert in Africa."

Sahara also told the court on Monday Britain's HSBC had confirmed a bank guarantee for $820 million backed by Aamby Valley Ltd, a Sahara unit that owns a development of luxury villas outside Mumbai.

An HSBC spokesman in India declined to comment. Bank of China's headquarters in Beijing could not be reached late on Wednesday.

Talks with US-based Mirach Capital Group to raise $2 billion collapsed last month after Reuters reported that a bank letter underpinning that deal was forged (Mirach to sue Sahara for $400 mn on defamation grounds).

The Supreme Court has allowed Sahara three more months to raise cash. It has warned it could ask a receiver to auction Sahara's assets if the group fails to raise bail.