The Sultan of Brunei has bid for the three overseas hotels put up for sale by the Sahara group – the Plaza  and Dream hotels in New York and the Grosvenor House hotel in London - The Wall Street Journal's online edition reported on Saturday. 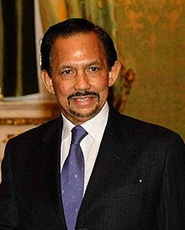 Citing people familiar with the developments, the report said an investment firm affiliated with Hassanal Bolkiah, the wealthy Sultan of Brunei, has offered to pay $2 billion for the three hotels, which are currently owned by the troubled Sahara Group.

The bid is the highest received so far for the properties, and the firm and Sahara are expected to reach an agreement by September.

Sahara chairman Subrata Roy has been negotiating the sale of the company's luxury hotels from a makeshift office in prison.

Roy has been in jail for more than five months after he failed to appear at a contempt hearing in a long-running dispute over his group's failure to repay over Rs25,000 collected from investors through illegal bond sales.

Roy's lawyer S Ganesh last week told the Supreme Court that Roy was holding "very effective" negotiations with potential buyers and that the group had signed a preliminary accord for the hotels.

Brunei officials have reportedly been in discussions throughout the summer with representatives of Sahara, WSJ.com said, citing sources, adding that an agreement could be reached as early as next month.

The Sultan, along with his luxury hotel operator, the Dorchester Collection, has been criticised for harsh new laws in Brunei, which include death by stoning for homosexuals and adulterers.

The laws resulted in widespread protests in the US, where gay rights activists called for boycotting the Beverly Hills Hotel, owned by the Sultan and operated by the Dorchester Collection, costing the luxury hotel operator millions of dollars in lost revenue.

The acquisitions were financed through borrowings from the Bank of China.

An investment arm of the Qatari royal family and Indian pharma billionaire Cyrus Poonawalla are bidding to buy the London property, which is located in the Mayfair area and managed by J W Marriott. But, they are not interested in the New York hotels, reports said.