The Supreme Court has allowed the Sahara Group to approach its creditor, Bank of China, for selling equities in three offshore hotels to raise money for securing bail for its jailed chief Subrata Roy, but reserved its order on the plea to keep him in house arrest. 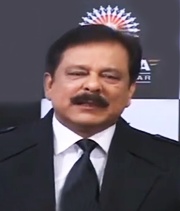 The court also asked Sahara to furnish loan details of overseas hotels owned by the group.

The court, in its earlier order, had asked Sahara group to pay Rs5,000 crore in cash and a bank guarantee of a like amount in order to get Roy's release on bail.

The group had since filed a fresh plea seeking modification of the bail terms.

The group said it would be furnishing a bank guarantee for Rs5,000 crore in 60 days after selling equities in its hotels in London and New York.

The SC bench comprising justices TS Thakur and AK Sikri, reconstituted after Justice JS Kehar recused from hearing and Justice K S Radhakrishnan retired, directed Sahara to communicate with Bank of China, which had lent money to it for purchasing substantial equities in offshore hotels and file an affidavit within a week on the outcome.

The Supreme Court bench, however, warned Sahara that if the Rs25,000 crore turns out to be black money, then Sahara would have to pay penalty of Rs72,000 crore.

Market regulator SEBI also set a pre-condition to the sale should not be to parties related to Sahara and sought details of the parties to whom the group plans to sell its assets.

In all probability, Sahara chief Subrata Roy will remain in jail till the group furnishes the bail amount as directed by the court.

Subrata Roy has been confined to Tihar Jail since 4 March. The Supreme Court had earlier asked Sahara to furnish Rs10,000 crore as bail for its chief.

The court rejected Sahara's earlier proposals to pay the money in installments but later diluted its order and asked it to pay Rs5,000 crore in cash and the remaining Rs5,000 crore in bank guarantee.

Sahara owns the landmark Plaza and Dream hotels in New York and Grosvenor House in London.

Subrata Roy was sent to jail after he failed to appear in court in a contempt hearing in a long-drawn legal battle between the Sahara group and market regulator Securities and Exchange Board of India (SEBI).

Two real estate firms belonging to the Sahara group had raised over Rs20,000 crore from the market using an instrument called optionally fully convertible debentures (OFCDs), which the capital market regulator found to be illegal. SEBI, and later the court, had directed Roy's companies to return the funds to the investors with interest.

Sahara, however, continued to dilly-dally on the issue of refunding a total of around Rs25,000 crore to investors and instead claimed it had already refunded the amounts and that SEBI was delaying the refund.

Sahara also claimed that it had repaid most investors and that its total liability was less than the Rs5,120 crore it had deposited with SEBI.

The court, however, rejected Sahara's arguments and instead asked SEBI to ascertain whether Sahara had refunded the amount to the investors as the group claims.