Rolls-Daimler in bid to take over Daimler engine supplier, Tognum

Shareholders of German engines supplier to Daimler, Tognum,  have until 18 May to sell their shares, after the joint bid from Rolls and Daimler, owner of Mercedes-Benz received the go ahead from German financial regulator, BaFin. 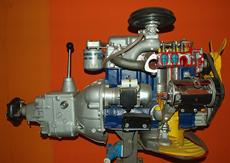 The German car maker already owns 28 per cent of Tognum, which reported 2009 revenues of Euros 2,52 billion.

Though the offer would be worth €24 per share, Dutch bank, ING with a 9-per cent stake in the company, said in a letter to the Tognum board that it has valued the company at  €30 to €32 per share.

ING said it considered at takeover bid at €24 per share as a substantial undervaluation on a stand-alone basis without factoring any of the synergies involved.

Friedrichshafen-based Tognum, which is being advised by Deutsche Bank and Lazard, is said to be in the process of making preparations for an extraordinary board meeting for 15 April.

The takeover bid would need over 50-per cent acceptances for it to go through.