Royal Enfield, the makers of mid-size motorcycles in India, is planning to enter the electric mobility space, reports citing its CEO Vinod Dasari said, confirming media speculations rumours that the company is seriously engaged in development of an electric motorcycle. 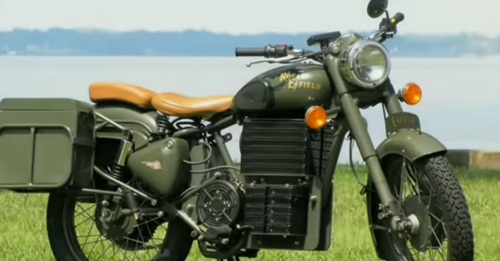 Royal Enfield may be working on an entire new range of products, which is likely to include electric motorcycles, CEO Vinod Dasari has said in two different interviews. Actual production of electric motorcycles, however, is expected to take a few years.
Dasari is reported to have told The Economic Times in an interview that the worst of the current downturn in the auto industry is over, and that he expects Royal Enfield sales to accelerate, possibly hitting double digit growth.
The CEO also hinted at a range of new products that the company is investing in, even in the midst of the current slowdown.
"Just because there was a downturn, we did not cut down on our capex. I don't think we will spend any more on any large (facility). Most of our capex will go into capability building, new products, electric and other stuff. And it will go into many small assembly plants around the world," Dasari told ET in an interview.
In another interview, the Royal Enfield CEO has said that the company's UK Technology Centre, one of the two R&D centres tasked with new product development, has rigged up an existing product with an electric powertrain and that he has "driven it" himself.
With the push towards electric mobility reshaping the automotive industry worldwide, manufacturers with little-to-no previous association with EV powertrains have also started to ready themselves for a supposedly inevitable future; Royal Enfield being just one of many others.
Earlier this year, the company announced an investment of Rs700 crores towards the development of newer and better platforms. Now, we can be certain that a part of it will go into the making of a Royal Enfield electric motorcycle.
While almost all major automotive manufacturers are working on an EV portfolio automakers cannot overlook the strong demand for fossil-fuel-powered products.
MORE REPORTS