Royal Enfield to set up plant in South East Asia

Eicher Motors-owned Royal Enfield is expanding its global footprint further by setting up a manufacturing facility in South East Asia to strengthen its presence in Thailand, Indonesia, and Vietnam. 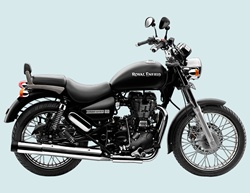 This is in addition to its plans  to set up wholly-owned subsidiaries in Indonesia and Thailand in 2018-19.
Chennai-based Royal Enfield Motors'  iconic brands are sold in 50 countries, besides enjoying cult status in the US and UK. It has an R&D facility in the UK and dealerships in Brazil, Argentina, and Colombia, its three most important Latin American markets.
"We are extremely bullish on Thailand and Indonesia. We have seen very good traction for Royal Enfield bikes in these market. We will have market companies with our own employees working there, where distribution will be done by us but dealers will be local. The idea is that it should be followed by local assembly but we are looking at different options." said Siddhartha Lal, MD & CEO, Eicher Motors.
He added, "Preference is to do contract manufacturing rather than make the bikes ourselves. From the taxation point of view, it makes sense to do assembly (then export bully built units from India). If it works we could have something in Vietnam too
If its plans to set up a new assembly unit in the South East, Royal Enfield can expect to boost the sales of its popular 350-650cc motorcycle range. Royal Enfield sold more than 660,000 units globally in FY 2016-17, and intends to ramp-up its production capacity to up to 900,000 motorcycles by end of 2018, to meet rising global demand.
MORE REPORTS