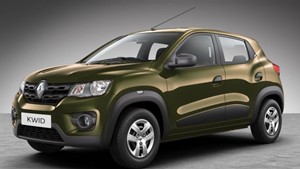 The car, which the company claims to be the most fuel-efficient petrol model in the country, is powered by an all-new 0.8 litre engine, and boasts a mileage of 25.17 kmpl,

At Rs2.57 lakh, it is also very competitively priced.

The car is expected to be launched in the next few weeks.

One of the most important parameters in the hatchback segment is the fuel efficiency and Renault Kwid is a clear winner in this regard, he added.

The car comes with features including class-leading ground clearance of 180 mm and a boot capacity of 300 litres with a seven-inch touchscreen Media Nav system and a digital instrument cluster.

The company, which sells various popular models like Duster and Lodgy, plans to grow its sales and service presence across the country to reach 280 outlets by next year, almost doubling its current reach.