The Renault Duster compact SUV, launched in 2012, has achieved the landmark of 1 lakh unit sales in domestic market within two years of its launch. 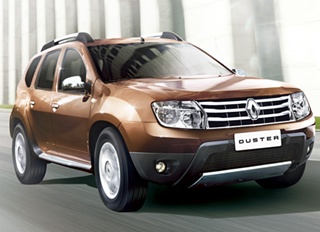 To mark the achievement, Renault India has launched a limited edition of the vehicle, priced Rs9.99 lakh (ex-showroom Delhi).

The company is also in the process of developing a facelift version of the SUV that would be offered with 4X4 option.

The tweaked variant would be launched later this year in India.

The compact-sized SUV became an instant hit, offering as much space and features as the conventional SUVs.

Meanwhile, buoyed by the success, the French auto major plans further strengthening its position with the launch of a 'four-wheel drive' version of the model later this year. It was also gearing up for launching a small car next year.

Renault India country CEO & managing director Sumit Sawhney told The Economic Times that in less than two years of launch in India, Duster had crossed the 1 lakh milestone. It had been a success for the company and to further strengthen the brand the company would launch a 'four-wheel drive' version later this year.

He added the limited edition Duster would be a feature-loaded model and would be available only during June.

India is among the top five countries, contributing significantly to the overall sales of Renault Duster globally. Duster is marketed in over a 100 countries and recently produced 1 million units of the compact sports utility vehicle (SUV) in the past four years across globe.

Replying to a question regarding the company's future product launches, he said, the company could be getting into a new category next year with the launch of a small car.

The small car, developed on a new global platform, is expected to be priced below Rs4 lakh.