Renault on Thursday took the lids off its off new concept car, Captur. The sports crossover model was unveiled by Renault CEO Carlos Ghosn ahead of its debut at the 2011 Geneva auto show. 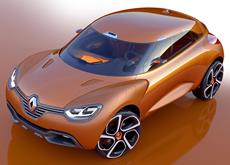 Designed around Renault's new design philosophy that projects the human life cycle, Captur is the sequel to the DeZir.

Just like the DeZir, Captur showcases fluid curves instead of angles, corners and lines. At its centerpiece is a large Renault logo that stands out against the stark orange-body backdrop.

The orange theme appears in a variety of different shades on materials both inside and outside the vehicle. Captur's sporty look is reinforced by its matt-finished butterfly doors and big tyres fitted to 22-inch black and white rims. LEDs relay the direction indicator signal in a wave effect running the whole length of the vehicle.

The car comes with a hard convertible top which, once removed, reveals a carbon fibre framework that can transform the Captur to a convertible from a coupe or to an off-roader from an urban vehicle.

Renault says it is possible to pull seatbacks from the side of the car to provide two full-sized rear seats, enabling Captur to accommodate four passengers. It also comes with the Visio-system that uses a forward-facing camera to provide driver-assistance.