Mumbai: To celebrate the 30th anniversary of the legendary 1978 Le Mans Classic race, Renault will be showcase four cars that fired the imagination of the spectators who attended the 1978 Le Mans 24 Hours, at the 2008 edition of the race.

In 1978, Renault entered the race with four Renault Alpines: three A442s and a single A443. These four machines shared a certain number of improvements, although it was decided to run different final drive ratios, turbo boost pressures and aerodynamic specifications. The strategy paid off handsomely: following a strong start from the A443, the principal strength of which was its sheer speed, the A442B profited from its endurance ability to collect victory after spending a full 23 hours and 24 minutes on the track, and a total of just 36 minutes in the pits. It was a genuine team win which paved the way for Renault's full commitment to Formula 1. 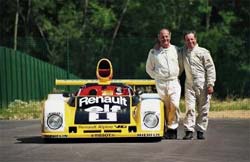 The A442 will take part in the Le Mans Heritage concours, while Jean-Pierre Jaussaud, one of the two winning drivers in 1978, will lead the anniversary parade at its wheel. The other two A442s will be on display at the Renault Collectors enclosure which this year features some 250 vehicles.

The Le Mans 24 Hours race is a unique litmus test for any car manufacturer. Endurance is the key, and the winning car is often the one which spends the least time in the pits over the 24-hour period. Victory in this prestigious competition is an ideal means for carmakers to forge a reputation for performance and reliability. In Renault's case, it was a mandatory step before focusing its energy solely on motor racing's premier category, Formula 1, which promotes the international awareness of a brand.