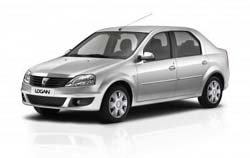 Mumbai: The new renovated Dacia Logan was launched on 1 July in France, four years after its debut.

The latest version of this celebrated three-volume saloon builds on the same strengths that forged the success of its predecessor, including what the manufacturer describes as "unbeatable value for money in terms of performance and equipment, plus outstanding cabin space and exceptional reliability".

The New Dacia Logan has gone beyond the original by featuring a more contemporary design.
Following the launch of Dacia Sandero in France on 27 June, the Dacia brand continues to build its appeal with a new version of Logan saloon. (View the Renault Dacia Logan video)

The new Logan maintains all the features that contributed to the success of the previous model - unbeatable value for money, exceptional space and acknowledged reliability - while upgrading its interior and exterior design.

All the versions gain a wider range of equipment. At the same time, the Emergency Brake Assist function introduced on Dacia Sandero, is now available on New Dacia Logan. (View the Renault Dacia Logan picture gallery)

The saloon is available in four equipment versions and five engine versions, with the same engines as the current model. The Dacia Logan goes on sale in France from 4 September. The entry-level price remains unchanged, with a range starting at €7,600 including VAT. The network will be taking orders from 1 July.

In the beginning of 2009, the Renault Group plans to launch a sport version for the Dacia Logan Sedan, with a 133 HP engine, the same engine that is used for the Renault Twingo Sport.