RIL pushes use of waste plastics in road projects

Reliance Industries Ltd (RIL), India's largest petrochemical company, has launched a project to use waste plastics in road construction, amid growing concerns over excessive dependence on plastics that are environmentally harmful. 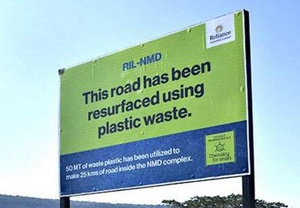 India, a country of 1.3 billion people, uses about 14 million tonnes of plastics annually, most of which ends up in landfills or the seas, in the absence of an organised system of plastics waste management.
The company will seek to work with the National Highway Authority and state government authorities to encourage use of a plastics-infused bitumen mix that the company says is stronger than those currently used for road construction.
RIL, as a part of its sustainability and waste recycling initiatives, has built 40 km of roads, using 50 tonnes plastics waste as a key ingredient, at its Nagothane manufacturing division, near Mumbai, in Maharashtra.
The road was built with bitumen fortified by shredded end-of-life plastics. Now, RIL plans to commercially launch the plastics mix for road building.
Speaking at the launch of the project at an event in Nagothane, RIL chairman Mukesh Ambani said India should focus on fighting pollution, not plastics, as, according to him, alternative uses for waste plastics can always be found.
Reliance, however, is yet to work out the financial details, like recycling cost, as the project remains a CSR endeavour, said Vipul Shah, chief operating officer (COO) of RIL’s petrochemicals business,
“We just completed phase one which looked at finding and end-to-end solution for this. We also realised that the plastics to be used for road construction has to be of a certain quality and size. We felt there was a need to launch a brand that would be guaranteed by Reliance for its quality,” Shah said.
"This can be a game-changing project both for our environment and our roads," says Vipul Shah.
Reliance typically uses light plastics, like those used as carry bags or snack wrappers that are not viable to recycle. These are shreded and mixed with bitumen, which, the company says, makes the bitumen stronger, cheaper while also extending life of the road surface.
India produces plastics waste of over 25,940 tonnes every day. Waste management is one of the biggest challenges for the country. RIL is already processing 2 billion used PET bottles every year and has plans to double it in the next 15-18 months. The company launched an umbrella brand R|Elan for eco-friendly fibre made from used plastic, using green manufacturing technologies.
Typically, 8-10 per cent of plastics is mixed in the regular bitumen mix for road construction, which makes the road stronger and water resistant. Mixing the plastic can also result in savings of up to Rs1,00,000 for every one km of road, 3.5 metres wide, as compared with a pure bitumen road, RIL said.
While the government has been talking about adapting to this technology, it is yet to be included this in tender specifications.
MORE REPORTS