Reliance Industries Ltd (RIL) has posted a 17.3 per cent rise in consolidated net profit at Rs9,435 crore for the fiscal fourth quarter ended 31 March 2018, against a net profit of Rs8,046 crore in the year-ago quarter. 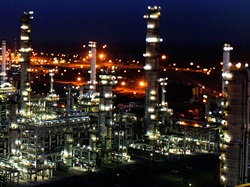 RIL reported gross refining margin (GRM) of $11.0 per barrel for the quarter ended 31 March 2018. GRM for the year was at a nine-year high of $11.6 a barrel, against $11 a barrel in the previous year, while higher interest and depreciation charges with the commissioning of projects across businesses resulted in relatively lower net profit growth.
“FY18 was a landmark year for Reliance, where we established several records on both operating and financial parameters. RIL has become the first Indian company to record PBDIT of over $10 billion with each of our key businesses — refining, petrochemicals, retail and digital services — achieving record earnings performance,” RIL Chairman and MD Mukesh Ambani said in a statement
RIL’s telecom venture Reliance Jio Infocomm posted a net profit of Rs510 crore for the fiscal fourth quarter, up 1.2 per cent sequentially from Rs504 crore in the third quarter. The telco, which started operations in September 2016 initially offering free voice and data and caused a big cut in mobile tariffs, has reported Rs7,128 crore operating revenue for the quarter, up 3.6 per cent sequentially.
Reliance Industries also ended the year with record annual consolidated net profit of Rs36,075 crore ($5.5 billion), an increase of 20.6 per cent year-on-year and PBDIT (profit before depreciation, interest and tax) of Rs74,184 crore ($11.4 billion), an increase of 33.6 per cent.
The company also reported record EBIT (earnings before interest and tax) from across business segments, including refining, petrochemicals, retail and digital services.
RIL’s telecom outfit Reliance Jio Infocomm also reported a quarterly net profit of Rs9,435 crore ($1.4 billion), a 17.3 per cent increase compared to the previous year.
Reliance Retail, the group’s retail arm, almost doubled its sales at Rs24,183 crore, against Rs10,332 crore in the year ago period.
RIL’s retail business for the whole year stood at Rs69,198 crore, more than double from the previous year and making it the biggest retailer in the country. This, however, includes RIL’s petro-retail business as well.
Reliance Retail revenue grew 134 per cent YoY to Rs24,183 crore (Rs10,332 crore). The company added 86 stores across formats during the quarter.
“Business without petro and connectivity is supporting the EBIDTA growth. Pure-play retail business is 52 per cent of the total revenues. Grocery during the winter season has performed well as we have upscaled the segment and brought in premiumised the products and revamped the stores,” says Gaurav Jain, head of corporate business development at Reliance Retail.
Jain also mentioned that the e-commerce business aided by Ajio.com is also growing at a rapid pace and about 7 per cent of the revenues comes from e-commerce at present. However, he did not give any guidance on expansion of this segment at a time when global players like Walmart are looking to enter the burgeoning online market.
RIL said its J3 refinery, one of the world’s most complex and highly integrated project, is nearly complete and has redefined refining and petrochemicals integration.
During the quarter, RIL announced strategic transaction with Saavn to form India’s largest platform for music, media and artists through its digital music service, JioMusic. The combined entity is valued at over $1billion, with JioMusic’s implied valuation at $ 670 million.
RIL also acquired 5-per cent equity stake in NYSE-listed Eros International PLC at a price of $15 per share. RIL and Eros International Media Limited (Eros India) announced that they will equally invest up to Rs1,000 crore to co-produce and consolidate content.
Reliance Retail further strengthened its presence through its partnerships. During the year, Reliance Brands acquired 46.6 per cent stake in Genesis Luxury Fashion Pvt Ltd. Genesis Luxury is a leading player in the business of Luxury apparel and accessories retailing for some of the leading international Luxury brands like Armani, Canali, Michael Kors etc. Genesis Luxury exclusively retails the products for these Brands in India thorough a chain of Exclusive Brand Outlets (EBOs).
Network18 subsidiary TV18 Broadcast Ltd took operational control and increased its stake in Viacom18 to 51 per cent by acquiring 1 per cent equity from JV partner Viacom Inc.
Reliance Jio Infocomm Ltd. (Jio) along with its technology partner Cisco won the “Best Mobile Operator Service for Consumers” award at the prestigious Global Mobile (GloMo) Awards 2018 at Mobile World Congress (MWC). In addition, JioTV app won in the ‘Best Mobile Video Content’ category for JioTV enabling Jio Digital Life.
Reliance Jio, India’s premiere mobile and digital services provider earned the number 17 spot on the global list, and also ranked at number one for Most Innovative Companies in India by Fast Company.
RIL was presented with the ‘Drivers of Change’ award at the Financial Times-ArcelorMittal Boldness in Business Awards providing recognition for RIL’s exceptional commitment to innovation-led exponential growth and bringing transformational changes to India.
MORE REPORTS